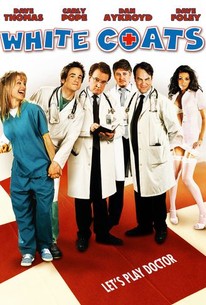 When the best doctors at St. Albert's Hospital suddenly abandon their posts, it's up to the six inexperienced interns to keep the hospital running and the patients breathing in an all-star comedy featuring Dave Thomas, Dan Aykroyd, Maury Chaykin, Dave Foley, Matt Frewer, and Saul Rubinek. Things aren't what they used to be at St. Andrews Hospital, and between the wild parties down in the morgue and the misplaced patients, it's going to take a miracle to maintain the appearance of order in this medical facility.

Marianne Copithorne
as Cashier
View All

The hospital comedy Intern Academy isn't just a dud, it's a depressing one.

Imagine a feature-length episode of Scrubs, only take out the laughs and slap in a bunch of gross-out garbage, and that's White Coats.

The jokes are hit-and-miss, but Thomas doesn't cohere them into much of a movie.

I've worked in a hospital for the past 28 years and I enjoy a good medical comedy. I loved the TV show Scrubs and ER, too. There were a few funny moments in this (such as when they did the saliva swabs and looked at them under the microscope) but overall, the movie was not funny.