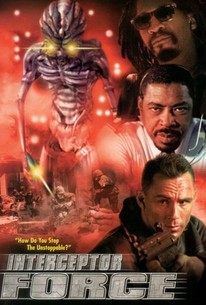 Three elite alien-fighters are out to find a creature who can change its appearance at a moment's notice in this sci-fi thriller. Shaun (Olivier Gruner) is the leader of the Interceptor Force, a small band of highly-skilled soldiers who are the first line of defense in the event of a hostile attack by space aliens. When a spacecraft crash-lands in the desert, Shaun and his partners Russell (Glenn Plummer) and Dave (William Zabka) are sent in to investigate; they discover that an angry alien has arrived on Earth and that the creature has the dangerous ability to assume the form of any being it wishes -- making it all but impossible to find. Interceptor Force also stars Brad Dourif, Ernie Hudson, and Angel Boris.

Ernie Hudson
as The Major

Kathy Lambert
as Technician
View All

There are no critic reviews yet for Interceptors (The Last Line of Defence) (Interceptor Force). Keep checking Rotten Tomatoes for updates!

There are no featured reviews for Interceptors (The Last Line of Defence) (Interceptor Force) at this time.