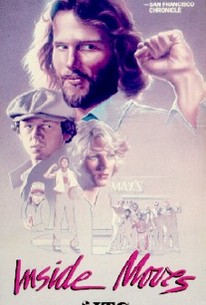 Richard Donner directed this compassionate tale concerning the daily struggles of handicapped citizens. The film deals with the volatile relationship between Roary (John Savage), who has unsuccessfully tried to kill himself, and the hair-trigger Jerry (David Morse), a basketball player who has no money to pay for an operation to repair his knee. Roary, who has been permanently crippled after jumping off a building, travels an emotional route from being deeply disturbed and embittered to slowly regaining confidence in himself. Helping him along the road to emotional recovery is Louise (Diana Scarwid), a young woman dealing with the handicapped who, in the process, comes to terms with her own limitations.

Critic Reviews for Inside Moves

Donner always floats on the surface, willing to let the superficial emotional appeal of his characters carry the movie. No attempt is made to explore the inner trauma of losing your hands or the social stigma attached to the physically disadvantaged.

There is so much high drama and splendid triumph that the movie loses any basis in reality, so it's impossible to relate to what anyone's enduring

Inside Moves is a film that celebrates human solidarity and the true meaning of friendship.

Audience Reviews for Inside Moves

There are no featured audience reviews yet. Click the link below to see what others say about Inside Moves!