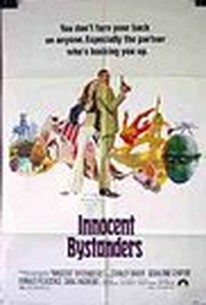 Innocent Bystanders stars Stanley Baker as a Bondlike British secret service agent. In collaboration with fellow spies Geraldine Chaplin and Dana Andrews, Baker is sent behind the Iron Curtain to locate a Russian scientist who has escaped from Siberia. There's a likelihood that the scientist was permitted to escape so that he can spy on the Good Guys. Baker must decide if the escapee is to be rescued or eliminated. The level of sadism and bloodshed in Innocent Bystanders is such that at times it makes the James Bond films look like models of decorum. ~ Hal Erickson, Rovi

Michael Poole
as Zhelkov
View All

A high-quota of sadism and gore.

There are no featured reviews for Innocent Bystanders at this time.