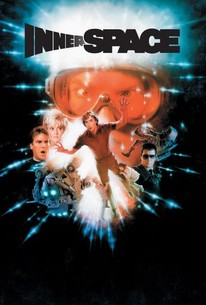 Critics Consensus: A manic, overstuffed blend of sci-fi, comedy, and romance, Innerspace nonetheless charms, thanks to Martin Short's fine performance and the insistent zaniness of the plot.

Critics Consensus: A manic, overstuffed blend of sci-fi, comedy, and romance, Innerspace nonetheless charms, thanks to Martin Short's fine performance and the insistent zaniness of the plot.

Critic Consensus: A manic, overstuffed blend of sci-fi, comedy, and romance, Innerspace nonetheless charms, thanks to Martin Short's fine performance and the insistent zaniness of the plot.

Robert Picardo
as The Cowboy

Kenneth Tobey
as Man in Restroom

Alan Blumenfeld
as Man with Camera

John Miranda
as Man in Elevator

Charles Aidman
as Speaker at Banquet

Tiny Adventure Alternatives to Ant-Man and the Wasp That You Can Watch at Home
The Matrix Trilogy, Bad Santa, Chef, and More on Netflix and Amazon Prime This Week

The plot is standard fantasy-adventure pulp, though director Joe Dante has so many screwball things going on in it that the comedy all but overwhelms the formulaic line of action.

Short has infinitely more possibilities and makes the most of them, coming into his own as a screen personality as a mild-mannered little guy who rises to an extraordinary situation.

While the anatomical special effects are imaginative enough, the manic rather than magical tone fails to achieve the sense of awe that made Fantastic Voyage -- clearly this film's inspiration -- so fascinating.

It has been made in a style best described as enthusiastic.

Innerspace is significant for one thing -- the establishment of Martin Short as the funniest new kid on the Hollywood block. Too bad that's not enough for the sensation-a-second makers of Innerspace.

It's entertaining and pleasing. [Full Review in Spanish]

Innerspace is a movie that sucks you in from the get-go, then keeps you hooked with the way it effortlessly moves from sci-fi to comedy to action, then back again.

While the sci-fi is pretty hard to fault for what it is, and the adventure is aces for a high-concept 1980s family movie, the comedy is awfully wan and reedy.

For all the Amblin technology on display, Dante's greatest effects are humanistic

With a great plot and screenplay, Innerspace, presents a great entertaining to the audience and that bring a funny and fine performance of Martin Short. Fresh.

Not the most amazing ever made, but it's a boat load of fun with some great gags!

Although this movie is really just an update of Fantastic Voyage, it has a lot of good actors, and it's fun, so I liked it.