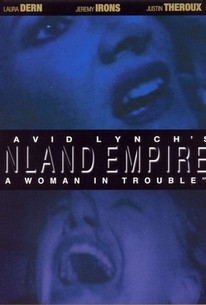 Critics Consensus: Typical David Lynch fare: fans of the director will find Inland Empire seductive and deep. All others will consider the heady surrealism impenetrable and pointless.

Critics Consensus: Typical David Lynch fare: fans of the director will find Inland Empire seductive and deep. All others will consider the heady surrealism impenetrable and pointless.

Critic Consensus: Typical David Lynch fare: fans of the director will find Inland Empire seductive and deep. All others will consider the heady surrealism impenetrable and pointless.

A blonde actress is preparing for her biggest role yet, but when she finds herself falling for her co-star, she realizes that her life is beginning to mimic the fictional film that they're shooting. Adding to her confusion is the revelation that the film is a remake of a doomed Polish production, "47," which was never finished due to an unspeakable tragedy. And, that's only the beginning. Soon, a seemingly endless onslaught of indescribably bizarre situations flashes across the screen: a sitcom featuring humans in bunny suits, a parallel story set in a wintry Poland, a houseful of dancing streetwalkers, screwdrivers in stomachs, menacing Polish carnies, and much, much more.

Justin Theroux
as Devon Berk/Billy Side

Julia Ormond
as Doris Side

Grace Zabriskie
as Visitor No. 1

Ian Abercrombie
as Henry the Butler

Inland Empire opens and contracts in your imagination while you watch it -- and you're still watching it well after it's left the screen. It's a long but thoroughly absorbing three hours.

An amazing and unshakeable experience.

A bucket of Lynchian leftovers, stirred slightly and left to ferment in the dark.

You may find Lynch's experimentalism and willful obscurity to be the work of a poseur, ultimately pointless drivel. I can understand that, but I think you would be wrong.

A can't-miss experience and likely one of the year's very best films.

The great eroto-surrealist David Lynch has gone truffling for another imaginary orifice of pleasure, with results that are fascinating, sometimes very unwholesome, and always enjoyable.

Lynch, armed for the first time with a digital camera, ventures so far into the excesses of split narrative, talking rabbits and the obscure that only the most die-hard fan will find merit in this celluloid rune.

Die-hard Lynch fans will undoubtedly find Inland Empire brilliant, but casual fans will likely think it tedious. For Lynch detractors, it will be a torture method more effective than the rack.

The one thing that David Lynch can do is to leave you with a lingering feeling. Long after a host of other films have come and gone, elements from his films stay lodged in your brain.

A terrifying nightmare to lose yourself in.

Trippy, twisty thriller is totally out to Lynch.

A nightmare from the mind of David Lynch. Inland Empire is his most disjointed and fragmented which also makes it the most dreamlike. His startling images instantly strike different emotions in viewers. At 3 hours long, this surreal masterwork is not an easy watch and can be a frustrating one but can be a rewarding one if in the right mindset. Laura Dern puts in a brave performance in the leading role.

I am sad to say i could not make it through 'Inland Empire'. I don't understand David Lynch's use of dream-like imagery. I was lost in the story, an found the film way too creepy and unentertaining. Typical Lynch fans may find plenty to love, but everyone else should stay as far away from this one as possible.