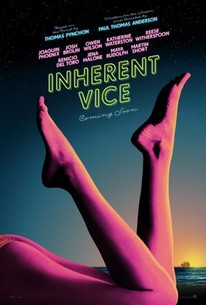 Critics Consensus: Inherent Vice may prove frustrating for viewers who demand absolute coherence, but it does justice to its acclaimed source material -- and should satisfy fans of director P.T. Anderson.

Critics Consensus: Inherent Vice may prove frustrating for viewers who demand absolute coherence, but it does justice to its acclaimed source material -- and should satisfy fans of director P.T. Anderson.

Critic Consensus: Inherent Vice may prove frustrating for viewers who demand absolute coherence, but it does justice to its acclaimed source material -- and should satisfy fans of director P.T. Anderson.

"Inherent Vice," is the seventh feature from Paul Thomas Anderson and the first ever film adaption of a Thomas Pynchon novel. When private eye Doc Sportello's ex-old lady suddenly out of nowhere shows up with a story about her current billionaire land developer boyfriend whom she just happens to be in love with, and a plot by his wife and her boyfriend to kidnap that billionaire and throw him in a looney bin...well, easy for her to say. It's the tail end of the psychedelic `60s and paranoia is running the day and Doc knows that "love" is another of those words going around at the moment, like "trip" or "groovy," that's being way too overused - except this one usually leads to trouble. With a cast of characters that includes surfers, hustlers, dopers and rockers, a murderous loan shark, LAPD Detectives, a tenor sax player working undercover, and a mysterious entity known as the Golden Fang, which may only be a tax dodge set up by some dentists... Part surf noir, part psychedelic romp - all Thomas Pynchon. (C) Warner Bros

Joe Dioletto
as Cop With Bigfoot

The Growlers
as The Boards

If the adaptation's a little too faithful to sustain a cinematically tight story, there's still a lot to admire in the sheer, uninhibited folly of the whole thing, the gall to get groovy while the Oscar-watchers are on high alert.

It isn't one film but many, an anthology of expertly recreated genre tropes, from fog-shrouded noir to sunlit paranoia.

I think I need to see it again, again.

Paul Thomas Anderson's Inherent Vice provides a rush of pure hallucinogenic pleasure, but its logic is mighty hard to follow.

As rich and strange as we've come to expect from the "late" Anderson films, but doesn't quite achieve the digressive whackadoo majesty of the novel.

I'm firmly on the side of loving it, but I know it's not for everybody. It's the kind of thing you'll like if you like that kind of thing.

[Joaquin Phoenix is] locked into playing one singular note throughout Vice, and, like all its varied characters, we care little about the good, the bad, or ugly events that will befall any of them.

Compulsively watchable and suitably frustrating, this stoner noir is one of Anderson's cleverest films, no doubt - but by some distance his least wise.

PTA gets loose with the film noir form only to better honor its essential dualities: people's simultaneous longing for and dreading of the truth, their desire to see things clearly or instead remain in the idealized world of their (intoxicated) mind...

A hilariously louche and ramshackle psychedelic noir, Inherent Vice is an audacious stylistic leap for Anderson, but his risks pay off beautifully.

I can count on one hand the times I've fallen asleep in a theater; at [Inherent] Vice I suspect my body was telling me this film was never going to get better, so why not do something more worthwhile with my time?

Wants to be quirky and funny, but is mostly rather boring with a few amusing scenes. The druggy P.I.'s case is confusing and ultimately not particularly satisfying. At least a lot of stars move around in the picture, but even their good performances create very few memorable scenes or a coherent plot. Waterston sticks out with her performance, though.

The plot is overlong, extremely intricate - convoluted would be the exact word - and has way too many characters, but still this trippy private eye crime-comedy compensates for its flaws with a delicious, groovy '70s vibe, a great soundtrack and a hilarious dopehead humor.

The main problem with adapting Thomas Pynchon is that Pynchon has written some of the most complex, trippy prose that has ever existed. Just reading his short story "Entropy" will confuse and educate you on the style and tonality of much of Pynchon's work. (Though that story includes aliens) A great way that Paul Thomas Anderson incorporates the madness and frivolity of Pynchon's words is having a narrator to spout it off constantly. Read more at http://www.bluefairyblog.com/oscarseries/2015/4/8/inherent-vice

Really disliked this. Could barely follow it and found it dull and ugly to look at. Characters and situations were stupid. I hated the lead character, not interesting at all to carry a movie. Just one surreal situation after another relying on smut or drug reference to be "clever". I have liked this directors other films quite a lot, so this is really disappointing.