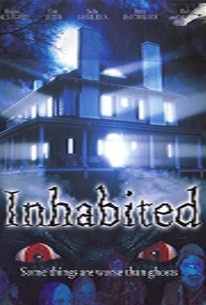 Although it looks as if the Russell family has found the home of their dreams, it doesn't take long before circumstance forces them to reconsider. A series of disturbing coincidences -- murdered pets, a rash of broken household items, and strange sounds -- suggest that something out of the ordinary is occurring. Reluctant to entertain a potentially supernatural answer, the Russell's first instinct is to shift responsibility towards their overly imaginative daughter, Gina. That theory bites the dust after the terrified family discovers a race of ancient monsters living beneath their home, and soon their only priority is moving out alive. Inhabited is directed by Kelly Sandefur and stars Malcolm McDowell, Megan Gallagher, Eric Lutes, and Sofia Vassilieva.

There are no critic reviews yet for Inhabited. Keep checking Rotten Tomatoes for updates!

Goddamn awful film, someone shoot the director in the head please. It really can't be classified as horror film, was confusing to say the least. A cable favourite