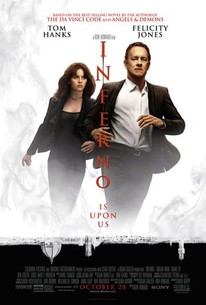 Peter Linka
as WHO Cistern Agent

Balint Adorjani
as Turkish WHO Agent

Zsolt Páll
as WHO Cistern Agent
View All

How Family-Friendly is A Dog’s Purpose?
The Path Season 2, Rosemary’s Baby, and More Available to Stream This Week
On DVD This Week: Inferno, Sherlock Season 4, The Man Who Fell to Earth, and More

Inferno is better than The Da Vinci Code or Angels & Demons, but both of those films set the bar reprehensibly low.

It's a lot more like a tweed-jacket version of Bond or Bourne or most any other thriller out there. But if Langdon is distinguished from the other globe-trotting saviors by his PhD, why aren't his movies smarter?

Unless you are a Dante scholar, and perhaps not even then, following Inferno is a wild goose chase - without the goose.

You know you've made some poor cinematic choices when you have to make Dan Brown characters less complex.

A stylish but tedious thriller that never does catch fire.

I thought it was OK. The plot may be almost laughably ridiculous... but, compared to the stuff I've been subjected to this year, it might as well be The Third Man.

Hanks returns as Massive Headwound Harvard Symbologist Robert Langdon, who this time around suffers from amnesia. After watching Inferno, we should all be so lucky.

So often the film adaptation of a beloved novel leaves a lot to be desired, but Howard did a nice job of making sure the movie followed the book for the most part.

It might not hurt to get some fresh blood behind the camera so Ron Howard can stop straining himself so damn hard.

Inferno is violently stupid and relentlessly unentertaining. It's the sort of movie where characters vomit exposition and explanation like they chugged a plot laxative before every scene.

The third film of the Langdon trilogy starts out a bit messy, mirroring the protagonist's lack of memory, but soon finds its footing. What follows is a fast, breathless riddle hunt through several European cities, Florence getting the most attention )and beautifully detailed so). That doesn't always make sense when you take a step back and think about it. but is pretty damn entertaining and offers quite a few surprises. The showdown plays out rather weirdly, though.

An enjoyable action flick, but not as smart as it think it is nor as smart as the audience might hope for!

With some of the least clever puzzles in the Brown oeuvre, "Inferno" proves that even hell can be made boring.

A movie so fast paced and rushed that it almost doesn't give us time to realize how ludicrous the plot is and how little sense it makes, with so many holes and inconsistencies, a lot of empty exposition and even Langdon constantly suffering from laughable "flashback crisis."