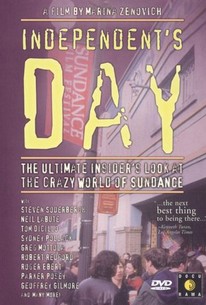 The Sundance Channel produced this guided tour through the world of independent films and filmmakers, tossing out the statistic that the movement has escalated from some 50 films in 1985, to 800 in 1997. Interview segments include Sundance fest director Geoffrey Gilmore, fest programmer Bob Hawk, writer-director Greg Mottola, producer Steven Soderbergh, critic Roger Ebert, and directors Sydney Pollack and Kevin Smith. Filmed in L.A., N.Y., and Park City, Utah, this hour-long documentary premiered on the Sundance Channel on January 15, 1997, the opening night of the 1997 Sundance Film Festival.

There are no featured audience reviews yet. Click the link below to see what others say about Independent's Day!