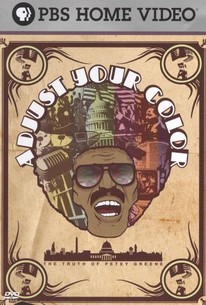 Discover the story of America's first shock jock in this documentary detailing how legendary radio personality Petey Greene fought poverty, addiction, and stint behind bars to become a leading activist during one of America's most turbulent periods. Narrated by actor Don Cheadle (who played Greene in the 2007 film Talk to Me), Adjust Your Color: The Truth of Petey Greene shows why everyone from the ghetto to the White House could identify with his universal message of understanding. By bringing taboo words and concepts out into the open, Greene effectively commanded his followers to confront their own prejudices. Greene wasn't afraid to use raw language in order to make a point, and his brash style was often seen as a direct threat to the establishment, but his fight against the powers that be would ultimately be eclipsed by his battle to overcome his own personal demons.

An admiring and often amusing portrait of the late Washington, D.C., radio and TV talkshow host.

...even [Don] Cheadle is no substitute for the man himself.

The truth of Petey Greene is that he wanted people to know what he felt, what he thought about the state of the Washington, D.C. he lived in.

There are no featured audience reviews yet. Click the link below to see what others say about Independent Lens!