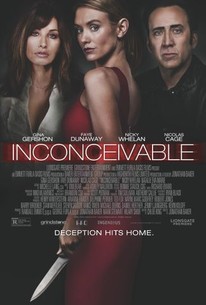 A mysterious young woman, Katie (Nicky Whelan), and her daughter move to a new town to escape her past and quickly befriends Angela Morgan (Gina Gershon), a mother of one who longs for a bigger family. As their lives become intricately entwined, Angela and her husband, Brian, (Nicolas Cage), invite Katie to live in their guest-house to serve as their nanny. Over time, the blossoming friendship between the two women spirals into a dangerous obsession as Katie becomes overly attached to the Morgans' daughter. Enduring lies and manipulations, Angela and Brian realize that sweet Katie is actually trying to destroy their family from within.

Nicholas Lynch
as Nick
View All

Something that both Nicolas Cage and Faye Dunaway will want to leave off their filmographies, and at this point that's saying something.

The laughably stilted "Inconceivable" is mostly notable for who's in it - and how poorly served they are by the script and direction.

This is a movie without suspense, nothing remotely sexy, and not even bad enough to have its own warped personality.

A thriller that's too obvious to come off, too melodramatic to surprise and too slow to hold our interest.

Inconceivable is a well made film anchored by strong work from Gershon, who gives her character a lot more depth than is present in the script.

The title says it all. Overwrought psycho thriller Inconceivable is so wildly implausible it will leave you shaking your head in disbelief or hooting with laughter.

The Hand That Rocks The Cradle with a surrogate!

A female driven thriller about a subject very much in the news.

It's bland, and the more helmer Jonathan Baker trusts in the dramatic limitations of the effort, the harder it is to sit through the movie.

Predictable and formulaic, Inconceivable is a mildly entertaining psychological thriller. The story follows a married couple that befriends a young single mother and hires her on as their nanny, but little do they know she has a secret agenda and they didn't meet by accident. Starring Gina Gershon, Nicky Whelan, and Nicolas Cage, the film has a pretty strong cast; Whelan is especially good and makes for a remarkably compelling villain. However, the plot couldn't be more by-the-numbers, though it does work in a couple of interesting twists. And, there are several intense and suspenseful scenes. Yet while it has its moments, Inconceivable is a fairly rote and bland film.