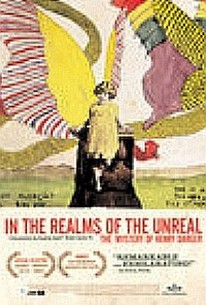 Critics Consensus: A fascinating treatment on the life of a reclusive man.

Critics Consensus: A fascinating treatment on the life of a reclusive man.

Critic Consensus: A fascinating treatment on the life of a reclusive man.

In the Realms of the Unreal Photos

An innovative masterpiece that literally gives wings to one man's singular vision of an imaginary world. Henry Darger lived a reclusive life and died alone in a Catholic mission in 1973. For more than 60 years, he created a massive literary and graphic body of work, including The Realms of the Unreal, an epic, fifteen-thousand-page novel with hundreds of paintings that recounts the wars between nations on an enormous unnamed planet. Darger's keen sense of composition and vivid colors allowed him to create incredibly intense and beautiful illustrations, which are often disturbingly violent. Consciously excluding art experts and psychologists, Yu presents impressions of Darger's work only from the people who knew him, letting the audience make up their own minds about the man. The film cleverly parallels his real life with his fantasies, making the oddness of his fantasy world more accessible.

Critic Reviews for In the Realms of the Unreal

A stylistic triumph and a sad but also romantic depiction of an artist in his purest state.

The best thing about In the Realms of the Unreal are the sequences in which Darger's drawings, of epic battles and pigtailed heroines, are gently animated -- the pictures brought to life with subtle, fluttering motion.

It is an engrossing introduction to the artist and his work.

Yu's decision to bypass the literature about Darger is unfortunate, because it contains so many fascinating details about his source materials, methods, creative problems, and aesthetic development.

Henry Darger's mind may have been a tough place to live, but In the Realms of the Unreal makes for a stirring visit.

The camera is too eager to swim in the artist's sea, but it might've revealed more if it had paused to let our imaginations provide the movement, as Darger's presumably did.

It was Yu's mistaken belief that experts would detract from her intimate approach that gives the film its tenuity, the lingering sense that far too little has been explored.

Instead of stooping to armchair psychology, this marvelous movie trusts its fascinating subject matter to spin its own web of mystery and melancholia.

Audience Reviews for In the Realms of the Unreal

Documentary on Henry Darger, the reclusive Chicago janitor who secretly wrote a slightly insane 15,000 page novel about a child slave rebellion mixing the Civil War, Christianity and children's fantasy stories, illustrated by hundreds of incredibly detailed full size paintings. A solid introduction to Darger, whose utterly unique and slightly disturbing oeuvre has made him the poster boy for the outsider artist.

A story so bizarre that you'd consider it wildly creative fiction were it not completely true. Jessica Yu documents the incredible secret life of Henry Darger, a janitor who's imaginative works of art and literature were discovered after his death in 1973. Fascinating stuff!

Henry Darger was a reclusive retired janitor who lived quietly in Chicago. Upon his death, his landlady discovered a side to him that no one suspected. He wrote several journals, detailing his life story, and a novel that takes up 15,000 pages, describing a surreal battle between good and evil, led by seven mythical sisters. He also painted several large murals, illustrating his tale. Strange fellow, indeed. This documentary tries to convey some of the grandeur of his life's work. A little dry for this viewer's taste, and the sheer volume of the work makes it difficult to assess the artistic value. Some of the images are quite bizarre, indicating an unfamiliarity with female anatomy. A mildly interesting look at the work of one who epitomizes outsider art.

[font=Century Gothic]"In the Realms of the Unreal" is a documentary about Henry Darger, a retired janitor and loner in Chicago. When he died at the age of 81 in 1973, about 15,000 pages that he had written in journals and a novel were discovered. Darger also created a good amount of artwork to accompany his novel about an almost endless war with a group of girls caught in the middle. [/font] [font=Century Gothic][/font] [font=Century Gothic]The documentary contains interviews with those closest to Darger who try to give some sort of insight into his inner life. It also has animated certain parts of his art in trying to illustrate events from Darger's life and the narrative of his novel. My own amateur opinion is that Darger suffered from arrested development. He was robbed of his own childhood when he spent seven years in an asylum and thus, as an adult, sought to recreate a fantasy childhood in its stead.[/font]

In the Realms of the Unreal Quotes