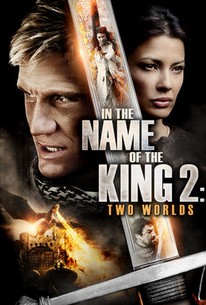 Dolph Lundgren stars as a modern-day warrior who travels back through time in this action-packed follow-up to the original In The Name Of The King. Granger (Lundgren), a lethal, ex-Special Forces soldier, finds himself transported back to a mystical age of sorcery, dragons and savage hand-to-hand combat. He has been summoned to defeat the forces of darkness and fulfill an ancient prophecy. But as he fights his way to the truth, Granger learns no one can be trusted -- and one wrong move could cost him not only his life, but the future of his world.

Critic Reviews for In The Name Of The King: Two Worlds

A dumb film, but mildly entertaining if your standards are low enough to rent something called In the Name of the King 2: Two Worlds in the first place.

What's not to love about a movie that features time-traveling ninjas, a CGI dragon and a scene where Dolph Lundgren literally asks the king what his name is. Genius!

After starring in The Expendables, was Dolph Lundgren really strapped enough for cash to star in this?

Audience Reviews for In The Name Of The King: Two Worlds

Uwe Boll just needs to stop because In the Name of the King: Two Worlds is absolute garbage.

The storytelling is a bumpy roller coaster ride. The editing is horrendous and the fade-ins and outs make it hard to take this film seriously. The character buildup is tiresome and the entire 90 minutes are a complete bore with an ending that is just plain awful.

The action is hounded by shaky camerawork and the CG is sub-par. The settings and costumes are also quite weak.

Dolph Lundgren is rubbish. He cannot carry this movie to save his life. Natassia Malthe has some spirit in her performance, but she does seem out of place at times.

In the Name of the King: Two Worlds is a 100% complete waste of time. Don't even consider it.

In The Name Of The King: Two Worlds Quotes