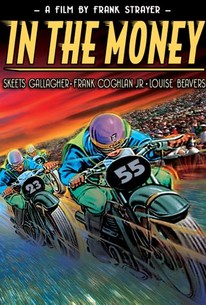 In the Money Photos

Evidently inspired by Paramount's screwball comedy Three Cornered Moon, Chesterfield-Invincible Studio's In the Money is actually more entertaining than its costlier predecessor. The main characters are members of a zany, perpetually improvident family, all of whom take polite little bows as they're introduced to the audience by narrator-co-star Skeets Gallagher, cast as a two-bit fight manager. Our genial host then tells the viewers exactly what each character is going to do in the course of the next 66 minutes -- and, by golly, they do just what they're supposed to. Facing financial ruin after purchasing a worthless stock, Gallagher and his confreres Lois Wilson, Sally Starr, Frank Coghlan Jr. et al. are rescued by the pugilistic skills of punchdrunk Warren Hymer. Coghlan Jr. went on to repeat his role in the 1936 remake of In the Money, Red Lights Ahead.

Critic Reviews for In the Money

Joan Blondell getting kind of hefty around the jowls, but working awfully hard for the few funny moments in the usual gold-digger yarn. Hugh Herbert almost pulls this into a higher class with his dizzy driving scenes.

There are no featured reviews for In the Money at this time.

In the Money Quotes