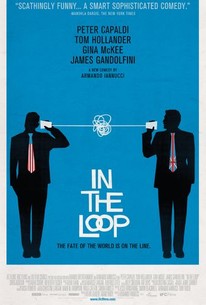 Critics Consensus: In the Loop is an uncommonly funny political satire that blends Dr. Strangelove with Spinal Tap for the Iraq war era.

Critics Consensus: In the Loop is an uncommonly funny political satire that blends Dr. Strangelove with Spinal Tap for the Iraq war era.

Critic Consensus: In the Loop is an uncommonly funny political satire that blends Dr. Strangelove with Spinal Tap for the Iraq war era.

In the Loop Photos

The run-up to war makes for curious rivalries and uneasy alliances in this political satire from director and co-screenwriter Armando Iannucci. Simon Foster (Tom Hollander) is a minor minister of international development with the British government who, in the midst of a radio interview, casually tells a reporter "war is unforeseeable." However, the prime minister is being pressured to commit British troops to support American forces in the Middle East, and communications director Malcolm Tucker (Peter Capaldi) goes into a tirade when the press turns Foster's passing comment into a major news story. Foster becomes an unwitting media figure, and he and his personal communications director, Judy (Gina McKee), are joined by political damage control expert Toby (Chris Addison) as they're sent to Washington, D.C., to meet with American political and military leaders. Despite Judy's and Toby's help, Foster displays a stubborn inability to say what he's supposed to, and he finds himself caught in the middle between pro-war factions -- including diplomat Karen Clarke (Mimi Kennedy) and State Department official Linton Barwick (David Rasche) -- and those who oppose the conflict, including Pentagon attachÃ (C) General Miller (James Gandolfini) and activist Liza (Anna Chlumsky). As if matters weren't already complicated enough, Liza used to date Toby when they were college students, and Gen. Miller was once involved with Clarke, adding bitter romantic history to an already rocky playing field. In the Loop received its North American premiere at the 2009 Sundance Film Festival. ~ Mark Deming, Rovi

Rita May
as Mrs. Michaelson

Will Smith (III)
as New Advisor

News & Interviews for In the Loop

12 Movies You Didn’t Know Feature the Doctor from Doctor Who
D.C. Insiders Call Veep the Most Realistic Show About Politics
Weekly Binge: Veep

View All In the Loop News

Critic Reviews for In the Loop

This alleged satire, which received four-star treatment from other critics, left me with a ho-hum and sorry feeling that I had wasted an evening seeing it.

Prepare yourself for an hour and a half of political farce made only funnier by the fact that these ludicrous actions and explanations all feel so terrifyingly plausible.

Shot in fly-on-the-wall style, In The Loop is as expertly and continuously funny as any comedy in years.

If you only watch a scene or two on the internet, it's hilarious. Watch it all and it's a little tiresome and unconvincing.

It's fantastic stuff, so over-the-top, so scabrous, so bitterly brilliant that you have to assume that, on some level, it rings true.

Possessing boundless cynicism, this caustic satire might not be for everyone but not a single performer's comic timing is off.

Not only is In the Loop one of the funniest things you'll see this year, but it's also one of the most intelligent pieces of British satire for some time.

A wicked, mean-spirited comedy filled with nasty people...I haven't laughed this hard in a long time.

Finally, fa-HINE-ally, someone has made a proper comedy. Armando Iannucci, to be exact, with In the Loop, his annihilating satire of recent Anglo-American misadventures in the Middle East.

The performances are outstanding, and there are many laugh-out-loud moments as confirmed by the fact that I laughed out loud.

Some have found In the Loop shallow for detaching its fevered gamesmanship from actual reasoning or consequences -- but isn't it rather chilling, how easy it is for the loop to form in a vacuum?

Audience Reviews for In the Loop

Peter Capaldi makes this film Just as he did in the series! It's very British and I love it! Funny, entertaining and enjoyable!

A hilarious political satire with a witty dialogue and a deliciously British sense of humor that I imagine is not for everyone - and Peter Capaldi is priceless and steals the show every time he appears, swearing insanely and shouting the f-word to everyone.

With a great cast of both Brits and Americans, and a stalwart approach to satirical humor, director Armando Ianucci delivers a great politically motivated comedy. Delving into the oft-mined political sphere, as of late, "In the Loop" follows the bungling of an interview by Simon Forster (Holland) and the subsequent worldwide chatter between the US and UK. It also speaks on the subterfuge of being a political animal, and the hand holding that goes into bills, policy, and wartime paranoia. Everyone in this is so hilarious, and over-the-top in the best of ways. Peter Capaldi steals the entire show as Malcolm Tucker, a lewd, cussing, inflammatory politician who strives to keep his career while double crossing everyone in the process. His longwinded rants on the state of politics, and his own role in its demise are both funny and sadly close to reality. James Gandolfini, Anna Chlumsky, Steve Coogan, and Mimi Kennedy also give outstanding performances as players in an intrigue filled game, whether they know it or not.

The Americans fancy another war, so backroom spin doctor Peter Capaldi sets about making sure that his British ministers tow the party line and take it up the ass in the name of our "special relationship". In The Loop is basically a big screen version of British political satire The Thick Of It, but incredibly it manages to keep the essence of the show no doubt at the cost of any semblance of box office receipts. Incredibly dark and witty, Armando Iannucci and Capaldi have managed to create a character that will become the stuff of comedy legend. His foul mouthed tirades against his quaking subordinates are as hilarious as they are excruciating and uses the kind of creative obscenities that we haven't seen the like of since Withnail & I. It also has the blend of political nightmare combined with absurdity that made it feel like the Dr. Strangelove of our times and has the kind of sharp wit and sophisticated dialogue of Thank You For Smoking. James Gandolfini is also the perfect casting choice as the US general who gives as good as he gets and the cast as a whole are pretty much flawless. The fact that the entire story is told in words rather than explosions and car chases means that 90% of its potential audience will no doubt switch off straight away, but anyone with two braincells to rub together simply must see this. The one drawback is that once the credits roll and the laughter dies away, you get the hollowing feeling that this really IS how wars begin. F-star-star-star-ing genius.

In the Loop Quotes