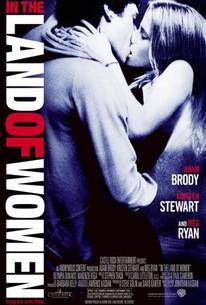 Critics Consensus: While pleasantly acted, In the Land of Women is a dramatically stilted film with underdeveloped characters.

Critics Consensus: While pleasantly acted, In the Land of Women is a dramatically stilted film with underdeveloped characters.

Critic Consensus: While pleasantly acted, In the Land of Women is a dramatically stilted film with underdeveloped characters.

In the Land of Women Photos

A man having trouble with women suddenly finds himself surrounded by them in this independent comedy drama. Carter Webb (Adam Brody) is a successful writer who has fallen into an emotional tailspin after his girlfriend, well-known actress Sophia (Elena Anaya), breaks up with him. When Carter learns that his grandmother (Olympia Dukakis) is in failing health, he decides to leave California and return to his hometown of Detroit to help take care of her and beginning work on his long-planned novel. As Carter spends time with his grandmother, he becomes friendly with her neighbors -- mom Sarah Hardwicke (Meg Ryan) and her two daughters, angst-ridden teen Lucy (Kristen Stewart) and precocious 11-year-old Paige (Makenzie Vega). As Sarah attempts to deal with a pressing personal crisis and Carter begins sorting out his relationship issues, he discovers that sometimes what feels like the end is actually just a new beginning. In the Land of Women was the first directorial project for actor and screenwriter Jon Kasdan, the son of writer and director Lawrence Kasdan.

News & Interviews for In the Land of Women

View All In the Land of Women News

Critic Reviews for In the Land of Women

Kasdan's gift for the smart crack is consistently undercut by a well-developed taste for schmalz.

Is it too early to call for a moratorium on earnest comedy-dramas about overly sensitive, hyper-verbal young men working through emotional crises by having deep, meaningful conversations with manic pixie dream-girls?

A movie with one awkward identity crisis.

The screenplay by Kasdan is soggy with earnest clichés.

The film belongs to Brody, an endearing screen presence.

This potentially saccharine weepy has an authentic ring, thanks to Jon Kasdan's script and a cast capable of delivering clever lines that sound just about right for whatever situation they're in.

Brody is the epitome of the trustworthy, funny, approachable, but magnetic nice guy that you would marry in a second if he really existed. It was like Tom Hanks and John Cusack had a love child.

As soon as it's over, you start forgetting about it. It's not a bad movie, it's just fine.

Jonathan Kasdan infects them with a smart-ass self-awareness and a grandiose sense of vitality that borders on preciousness. It has that Baby Boomer quality of his father's films without any of the history to back it up.

Writer-director Jonathan Kasdan - he of the much-loved, short-lived Freaks and Geeks -- is no stranger to quirky characters. But why is it then that the characters in Land -- especially the high schoolers -- ring so false?

Audience Reviews for In the Land of Women

I really liked this movie. Adam Brody did a good job playing the leading man and Kristin Stewart is amazing.

Sort've light, sort've intelligent, sort've good. It mainly rides on the performances of Adam Brody, Kristen Stewart and Meg Ryan. The latter two definitely make this as good as it is, while Adam Brody basically just plays a variation of Seth Cohen from The O.C. So the mother/daughter storyline works extremely well, as does their shared time with Adam Brody. However, his time spent alone is utterly worthless and cheesy.

I caught about a half an hour of this on TV, and it certainly looked and sound like it was made for this medium. It may be good, but I'll probably never find out. [Real rating pending, I suppose.]

i loved this. a couple years before Kristen Stewart was doomed to be known as "the twilight girl"

In the Land of Women Quotes