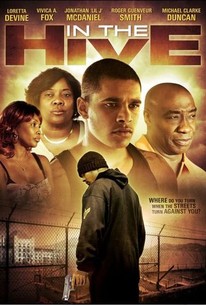 In The Hive Photos

Sixteen-year-old Xtra Keys lives by a few simple rules, all rooted in a world of brazen, retaliatory violence. His very survival depends on his ability to be brick-hard, emotionless and impenetrable with everyone. Only his infant son is excluded from the hard-shell persona. Xtra hopes to raise his son better than his boozy, razor-edged mother raised him and his younger siblings. Xtra just might get his wish when he's thrust into the world of the HIVE, an unorthodox alternative school full of other discarded boys who, because of their disciplinary issues and substandard grade levels, have been kicked out or abandoned by every school in this Southern rural county. For these black boys, the HIVE may very well be their last chance before jail but first they have to persevere under the HIVE's director, the indomitably audacious Ms. Inez and her friendly giant of an assistant, Mr. Hollis, both of whom rule the HIVE with love, discipline, soul food and the expectation of excellence, none of which Xtra is in any way prepared for. Based on an actual school in North Carolinas Bertie County, IN THE HIVE is a movie about the power of love and a gripping reminder that we can all make a difference in a child's life, even the ones who've been relegated to the discarded heap for far too long. (c) Official Site

Vivica A. Fox
as Billie

Critic Reviews for In The Hive

Duncan commands our attention in a way he rarely had the chance to in his career.

There are no featured reviews for In The Hive at this time.

In The Hive Quotes