In the Electric Mist2009 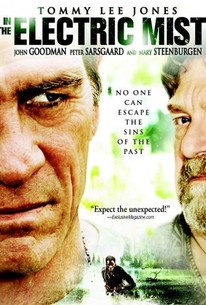 In the Electric Mist Photos

A detective tracking a serial killer who preys on young women finds his investigation complicated by a glamorous Hollywood starlet and a ruthless crime kingpin in director Bertrand Tavernier's adaptation of the James Lee Burke novel In the Electric Mist with Confederate Dead. Jerzy Kromolowski, Mary Olson-Kromolowski, and Tommy Lee Jones collaborate on the screenplay for the film, which stars Jones, John Goodman, Peter Sarsgaard, Ned Beatty, and Tom Sizemore.

Alana Locke
as Alafair
View All

News & Interviews for In the Electric Mist

View All In the Electric Mist News

Critic Reviews for In the Electric Mist

Jones does as best he can with the material, but the soupy mix of unconvincing Southern accents, incoherent editing and the ghosts of confederate soldiers soon bring a sense of irritation that overwhelms even his solid performance.

Despite its missteps, I thoroughly enjoyed the thriller.

A good film from an accomplished director but one that is well down the list of his finest achievements.

Tavernier captures the moody, misty Louisiana atmosphere and has a low-key, slow pace that fits the energy of the sticky South.

An excellent thriller that shouldn't go overlooked by fans of the genre.

The film's atmosphere is so potent and the characters so richly drawn that we can forgive a few odd connections and coincidences.

Even the main plot itself turns out to be mostly a loss, largely forgotten by the time we wrap things up in the end.

It's a complex web of story in this film, but hardly hard to follow.

Even though the film meanders a bit, the skilful direction and camerawork combine with strong acting to create an engaging, insinuating thriller

There are too many subplots going on to make it work other than as a mildly intriguing curiosity.

Audience Reviews for In the Electric Mist

Author James Lee Burke has been dishing out justice in numerous crime novels over the years but justice has never been done in a decent film adaptation of his work, and with this latest offering from director Bertrand Tavernier it looks like we'll have to wait a while longer. Recovering-alcoholic Louisana detective Dave Robicheaux (Tommy Lee Jones) is trying to solve a series of murders when the corpse of a black man killed forty years ago surfaces in a nearby marsh. Robicheaux remembers the man's apparent disappearance but endevours to find out what really happened, implacating the local law enforcement and corrupt businessman 'Baby Feet' Balboni (John Goodman), while having visions of dead confederate soldiers, giving him advice. A fine cast, a fine director and based on the novel of a fine crime writer still wasn't enough to prevent this murder mystery from being flat and uneventful. Those unfamiliar with James Lee Burke's character of Dave Robicheaux (Alec Baldwin last played him in "Heaven's Prisoners") may be a little puzzled as to his behaviour throughout. I wasn't looking for Tavernier to labour the point but a little more of a back story on Robicheaux would have been beneficial, regardless of Jones putting in a typically good performance with what he had to work with. Goodman also does his best with the under-developed villian of the show and fine supporting actors are wasted in small and thankless roles. The major problem though, is the pace. It's just too slow. I can cope fine with slow-burning murder mysteries. In fact I prefer them, but they have to have interesting characters and decent plot developments to keep it going. This has neither. It doesn't even make good use of it's excellent deep south setting or elaborate on it's mystical undertones. The images of dead Confederates, who appear to Robicheaux, could have been omitted completely. Although, I imagine in the book they play a far bigger part. This film had so much potential but nothing seemed to gel or flow. The pace was all wrong; the majority of actors had nothing to do; there were several gaping plot holes and unexplained events, and the ending was rushed with a very lazy epilogue tacked on. Apparently the film went through some post production issues and went straight to DVD on it release. Now, I can see why. Slow and disappointing, considering the talent involved.

A small town detective hunts a serial murderer while contending not only with his own alcoholism but that of a visiting movie star. I can't say I'd ever heard of this film but decided to give it a go based on the presence of Jones and Goodman and I must say that they didn't disappoint. Tommy Lee proves he can still play the tough guy at his ripe old age and all of the scenes when he's being grampa bad ass are easily the best. It's one of those crime thrillers that tries a little too hard to show the "local colour" and some of the peripheral characters and sub-plots are not entirely convincing but the central concept of swamp-noir really worked for me. The minor affectation of his conversations with a dead confederate general are something you'll either accept or not but as a whole I enjoyed it. It's a shame that the ending was a little bit of an anti-climax as the showdown was rather short lived but thanks to a strong central performance its well worth a look.

an incredibly interesting film with an exceptional cast about an eccentric police officer and a bizarre set of criminals. the unfolding of events late in the film loses coherence which holds the film back but the intrigue until the final sequences still makes the film more than worth viewing.

A little strange this one, not a bad film but something doesn't quite fit? Good actors but it doesn't seem to follow the more interesting story line in the film. Starts quite slow, then it seems to finish in a bit of a hurry. Could've been a lot better.

In the Electric Mist Quotes