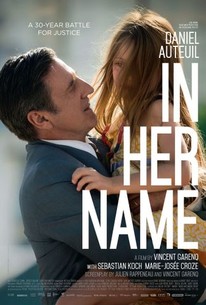 Inspired by a true story. July 10, 1982: Kalinka Bamberski, fourteen years old, is found dead in her mother's new house in Germany. Kalinka would spend her vacation there ever since her mother had started a new life with a seductive and charismatic doctor, Dieter Krombach. Although the strange circumstances of her death, which involved rape, point to Krombach, a conspiracy of silence seems to protect him. André Bamberski, Kalinka's father, sets out on a struggle for justice confronted by borders and barriers. Alone against doctors, judges, and even against his ex-wife, who is deep in denial, his determination for his daughter's murderer to be found guilty and sentenced will be relentless - even if it means spending his whole life in order for justice to be done.

The film benefits from Auteuil's moving lead performance, though the narrative is less exciting than it is resolute.

Auteuil and Koch are perfect rivals and much of the film's success is due to their anti-chemistry, even though they share very little screen time.

A painful and raw film with excellent performances by Daniel Auteuil and Sebastian Koch. [Full review in Spanish]

What could have been a sobering telefilm becomes a disturbing and more than worthy film based on real events. [Full review in Spanish]

With fleet features and darting eyes, Auteuil always excels at indicating fear, at capturing the quicksilver of thought. He applies those skills to wide-ranging use as events, and years, flicker past.

An interesting and intense film that lets the viewer make its own conclusions through a very agile ending. [Full review in Spanish]

A very well made drama inspired in true events. [Full review in Spanish]

There are no featured reviews for In Her Name (Au nom de ma fille) at this time.