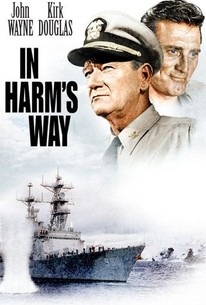 In Harm's Way, based on James Bassett's novel Harm's Way, has enough plot in it for four movies or a good miniseries (when it was shown on network television in prime time, it was broken into two very full nights). On the morning of December 7, 1941, a heavy cruiser, commanded by Captain Rockwell Torrey (John Wayne), and the destroyer Cassidy, under acting commander Lieutenant (jg) William McConnell (Thomas Tryon), are two of a handful of ships that escape the destruction of the Japanese attack on Pearl Harbor. Under Torrey's command, the tiny fleet of a dozen ships carries out its orders to seek out and engage the enemy fleet. But lack of fuel and a daring maneuver (but tragic miscalculation) by Torrey causes his ship to be seriously damaged. He's relieved of command and assigned to a desk job routing convoys in the shakeup following the attack, and his exec and oldest friend, Commander Paul Eddington (Kirk Douglas), is reassigned after a brawl, the result of his anger after identifying the body of his wife (Barbara Bouchet) who was killed during the attack while cavorting with an Marine Corps officer. Torrey's shore assignment leads him to reestablish contact on a very hostile level with his estranged son, Ensign Jere Torrey (Brandon de Wilde), from his long-ended marriage; he establishes a romantic relationship with Lt. Maggie Haynes (Patricia Neal), a navy nurse; and he also befriends Commander Egan Powell (Burgess Meredith), a special-intelligence officer. Partly as a result of his contact with Powell, Torrey is chosen by the commander of the Pacific Fleet (Henry Fonda) to salvage an essential operation called Sky Hook, which has become bogged down through the indecisiveness of its area commander, Vice Admiral Broderick (Dana Andrews). Promoted to rear admiral, with Eddington -- who'd been rotting away on a shore assignment, drunk most of the time -- assigned as his chief of staff, Torrey gets Sky Hook rolling and finally finds his purpose in this war, gaining the belated admiration of his son in the process. Eddington is similarly motivated but is still haunted by the violent, ultimately self-destructive demons that blighted his marriage and his life -- he is particularly attracted to a young nurse, Annalee Dohrn (Jill Haworth), not knowing that she is already involved romantically with Jere Torrey. Meanwhile, McConnell survives the sinking of his ship and is ordered to join Torrey's staff. Matters all come to a head when the Japanese begin a counter-offensive to Torrey's planned troop landing. And just at the time Torrey needs his men at their best, Eddington's violence and rage boil to the surface in a way that will destroy him and blight both men's lives. In a final attempt at redemption, Eddington provides Torrey with the information he needs to set up a battle that he has at least a chance of winning, pitting his small task group of destroyers and cruisers against the Japanese task force led by the Yamato, the largest battleship ever built. ~ Bruce Eder, Rovi

Franchot Tone
as CINCPAC I Admiral

Critic Reviews for In Harm's Way

It goes on and on, the slowness exacerbated by Preminger's customary long takes and by the endless parade of star cameos.

To the lack of coherence that Preminger demonstrates throughout the film, we add the complete disinterest by flat and blurred characters. [Full Review in Spanish]

Why did so normally astute a trend setter as Mr. Preminger decide to make a Pacific-war melodrama ten years too late?

Thematically, this WWII drama is a typical John Wayne fare--the Duke imparts lessons of manhood and honor--but technically, it's an atypical Preminger movie, slow-paced and shapeless.

Preminger seems happier with long transition shots of the Hawaiian Islands and military class ships than it does with creating rhythm in the film's narrative.

Audience Reviews for In Harm's Way

Solid WWII drama with a most impressive cast even with many future stars in small roles. Some of the special effects are dated and obvious now but for the time frame were effective. John Wayne and Patricia Neal are unexpectedly quite well matched as a couple with her prickliness and his laconic style playing well off each other. The picture flows well considering it's extended length, moving from one set piece to the next without a great deal of wasted exposition.

John Wayne leads the United States Navy into a monumental struggle against the Japanese. Kirk Douglas is the anti-hero who stirs up a fuss. The ships are models and the battles are conducted in a bathtub.

"Old Rock of Ages, we've got ourselves another war. A gut bustin', mother-lovin' Navy war."