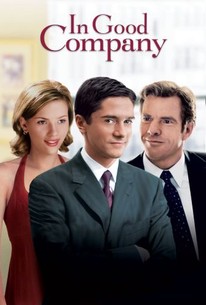 Critics Consensus: The witty and charming In Good Company offers laughs at the expense of corporate culture.

Critics Consensus: The witty and charming In Good Company offers laughs at the expense of corporate culture.

Critic Consensus: The witty and charming In Good Company offers laughs at the expense of corporate culture.

Dan Foreman is headed for a shakeup. He is demoted from head of ad sales for a major magazine when the company he works for is acquired in a corporate takeover. His new boss, Carter Duryea, is half his age--a business school prodigy who preaches corporate synergy. While Dan develops clients through handshake deals and relationships, Carter cross-promotes the magazine with the cell phone division and "Krispity Krunch", an indeterminate snack food under the same corporate umbrella. Both men are going through turmoil at home. Dan has two daughters, Alex, age 18, and Jana, age 16, and is shocked when his wife tells him she's pregnant with a new child. Carter, in the meanwhile, is dumped by his wife of seven months just as he gets his promotion. Dan and Carter's uneasy friendship is thrown into jeopardy when Carter falls for, and begins an affair with, Dan's daughter Alex.

Dean A. Parker
as Mike

Sam Tippe
as Kid at Party

News & Interviews for In Good Company

View All In Good Company News

Critic Reviews for In Good Company

While In Good Company has a few moments of comedy that work, it inescapably feels like a sitcom.

A warm and witty comedy brimming with sharp insights.

Not only the best American picture of 2004, but also the most grown-up movie to come from Hollywood in recent years.

A bland, occasionally phlegmatic pastiche of cliches and dull encounters.

Ultimately, this workplace fairy tale creates its own cheer. When its time is up, you'll feel like you've been in good company.

If the rest of the movie were as good as Scarlett, we might give a damn.

Great acting and scripting makes this a package well worth taking.

Despite its shortcomings, In Good Company is a heartfelt film that touches on the elements of human behavior. Easy-going with an easy gentle flow, there is a realism that will connect with us all.

This structure works a treat for the family tale, but on the corporate side it becomes the deal breaker that undermines a plot which pleasingly inverses the age means power paradigm.

A so-so script but great performances.

A great comedy drama that is both a study of life, and relationships.

An engaging diversion that lovingly, wisely plays with human foibles and uncomfortable truths.

Audience Reviews for In Good Company

Watched this a few times over the years. Always enjoy it. Good cast and relatable story about work pressure and office politics. Scarlett Johansson plays a small but good role here, and Topher is likeable too.

how can you not love Topher?

Good film and script, don't really like Scarlett Johansson in this one but the plot is interesting and Dennis Quaid and Topher do a good job.

A smart, witty, compelling and very entertaining mixture of comedy and drama. Satisfying and engagging. Dennis Quaid is at the top of his game, giving a great, subtle and excellent performance. Topher Grace is teriffic, he proves he has a future in film. It's well-crafted, heartfelt and wonderful throughout. Theres plenty of heart and intelligent laughs.