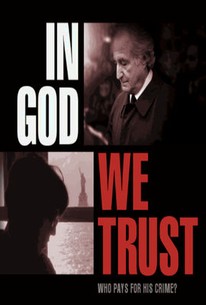 Victor Kubicek and Derek Anderson's documentary In God We Trust profiles Eleanor Squillari, a woman who worked loyally as the secretary to Bernie Madoff for decades without realizing how he was stealing millions from so many unsuspecting victims. After he was arrested, she felt a strong desire to uncover the truth and ended up doing research that helped send her former boss to jail for an extensive amount of time.

Critic Reviews for In God We Trust

... organized around the testimony of perhaps the ultimate insider, Madoff's personal secretary Eleanor Squillari, who cooperated with the FBI to help trace Madoff's many shady business deals.

There are no featured reviews for In God We Trust at this time.

In God We Trust Quotes