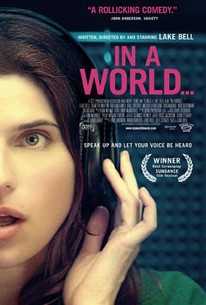 In a World... Photos

News & Interviews for In a World...

Kubo and the Two Strings, Kevin Hart: What Now?, The BFG, and More on Netflix and Amazon Prime This Week
Critics Consensus: Elysium Soars; Planes is Grounded

View All In a World... News

Critic Reviews for In a World...

Writer-director Lake Bell is also the star of this quick-witted beguiling comedy of female identity, family ties and an unseen but fiercely competitive aspect of the film business.

Can't wait to see what Lake Bell the filmmaker does next.

Much of the humour here is barbed and cynical.

Bell's revelation is that females (even high-achieving ones) are surprisingly likely to use a voice that suggests they're an ickle-wickle pushover.

In a world where American comedies often die in ditches, pushed in by negative roadblocking (useless scripts, miscast stars), here is an affirmative mirth work, modestly cast, which actually makes you giggle

Well, it's engaging and eccentric, and Bell deserves her star turn.

Bell's sharp instincts fuse the caustic and the cute to often delirious effect.

Bell's script is distinctly female in perspective, taking aim at industry sexism without being seminar-like about it. An accomplished feature debut, IN A WORLD... shows there should be more to come from Bell as writer/director.

In a World... is a clever, character-centric comedy that's got a great cast and is framed by such a strangely peculiar backdrop that it sets itself apart.

Many of the contrivances seem like placeholders in the script, meant to be replaced with better thought out action later on, but the movie still contains some truths that don't make their way into films directed and written by men.

The director's take on a world unfamiliar to even the most ardent of film fans may be ultimately inconsequential, but it's a sharp and witty calling card for Bell.

In a World... is a movie built for film geeks, trailer junkies and, well, anyone who's ever noticed Hollywood's sexist side.

Audience Reviews for In a World...

This begins sort of like an insider's critique of the behind-the-scenes schmucks of damned Hollywood, factory outlet for packing foam, but gradually eases its squint, and so the people become not-just-people but relatable folks, and then even likable. Bell herself is the main example of this: shallow and plastic at the start, but someone you wind up rooting for by the end. Well written (and for a film that's saying something) packed with surprises too. Pretty good. Unique.

Speak up and let your voice be heard. Good Comedic Film! This modest comedy takes place in the mini-world of people who do voice overs. Apparently this world exists. And, like all such worlds, it has stars, former stars, people who want to be stars and will make it, and people who want to be stars and won't make it. Bell is a good director and a good actor. She keeps her excellent ensemble cast moving along. The story line starts with boy meets girl, so you know how it will end, but there are enough unexpected twists and turns to hold your interest. It will work well on the small screen. My advice is to seek it out and see it. Just don't expect a movie that's so powerful that it will change your life forever. An underachieving vocal coach is motivated by her father, the king of movie-trailer voice-overs, to pursue her aspirations of becoming a voiceover star. Amidst pride, sexism and family dysfunction, she sets out to change the voice of a generation.

I believe that the main disconnect between viewers and critics of this film, was that critics realized that Lake Bell writing, directing, and starring in a film that had to do with female empowerment via inclusion was a very big deal. Females playing the lead role, and creating stories that are actually seen, is a very rare occurrence that not a lot of people talk about. The story is interesting, since it deals with the real world issue of voice overs being dominated mostly by men. The characters are interesting as they interact, but not as standalones. The plot doesn't really flourish past its initial concept, though it does come to a satisfying end. The struggle between our lead character and her voice-over pro of a father is pretty tense, and the ending shows that struggle with intelligent discourse. While it's sad that the film didn't move past basic romantic comedy to address its premise, it was a sweet satisfying little comedy with equally amusing actors.

A quirky comedy based around the high flying world of the voice actor, well the trailer looked quirky. A small budget film whose main star wrote, co-produced and directed the feature. I saw the trailer for this and really thought it would be a good funny comedy...which it is kinda, but not entirely. The plot revolves around a small family in LA, the father is a famous voice artist and his daughter is aspiring to follow in his footsteps. From this we get the main crux of the film, the voice over business for movie trailers in Hollywood is typically a male dominated field, but that is now being challenged by this young woman, the horror!. That is the films main plot, there are other sub plots revolving around other family members, the sister and her other half, the mother and a few friends. But to be truthful none of these are interesting and feel more like padding around the main story. I found this to be the problem with the film really, the main story is the most interesting bit, yet we don't get a great deal on it, its all about family issues which is boring. We do get to know another preening voice actor played by Marino who makes a big difference. Alongside Melamed (a real voice artist) both men save the film in my view, watching these guys swan around as if they were the biggest thing in Hollywood is priceless. The dialog from Melamed's character at times is so egotistical, even when aimed at his own daughter, its both amusing and embarrassing to watch. Even though the films premise is about an area in show business that is barely touched upon that doesn't really mean its interesting. The whole idea is about women being the underdog in this field, that its unheard of for women to do voice work for a major film trailer, equal rights for women and such. One thing that went through my mind was all these people are wealthy from doing not much at all because I don't call voice acting work. So are we suppose to be emotionally involved? are we suppose to get behind the female lead here? are we suppose to care about this irrelevant showbiz injustice? because frankly I didn't care at all. I didn't care about any of the characters really, I found many of them annoying and most were overacting to the camera, especially the films director and lead Lake Bell. You may think I'm being harsh, after all this film won awards at Sundance and was dribbled over by all the critics. Its not a bad film, far from it, its original and fresh, its warm and has some good performances, but its dull and uninteresting accept for the odd scene. Its not a self-serving inside Hollywood type of film, it does mock Hollywood gently. Funny thing is we the regular folk all know they don't actually mean it, these showbiz folk 'mock' but they lap the lifestyle up really. In my opinion the film only comes to life as we near the end which gives you what the entire film has been building up to. Other than that watching all these people live their semi rich lives in sunny LA does nothing for me.

In a World... Quotes