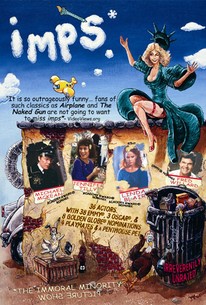 Produced in the 1980s but held from release until the dawn of the new millennium, imps* (*The Immoral Minority Picture Show) is a episodic, absurdist comedy spoof in the tradition of The Kentucky Fried Movie and The Boob Tube. Prepare for an unrelenting celebration of sheer stupidity as you get a sneak peek at the Marquessa de Sade's agonizing new music video, watch the Northern Indiana Pencil Sharp-Off competition, and follow the dumbest heroine in horror history as she navigates a darkened house.

There are no critic reviews yet for imps*. Keep checking Rotten Tomatoes for updates!

There are no featured reviews for imps* at this time.