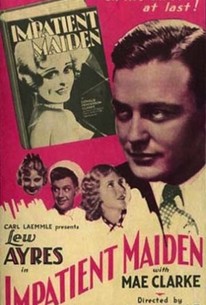 Ruth Robbins (Mae Clarke) is already a cynic about marriage, and well she should be -- at age 19, she's the secretary/stenographer to Albert Hartman (John Halliday), one of the top divorce lawyers in Los Angeles, and she's heard so many detailed accounts of marriages gone wrong that she regards the institution itself as poison. She's living happily enough with her daffy southern roommate Betty Merrick (Una Merkel) in a run-down apartment in Los Angeles's Bunker Hill section, off of Angel's Flight, going about her life. And then she chances to meet Myron Brown (Lew Ayres), a young doctor just starting his internship. They fall in love and he wants to marry her, but knows that it will be years before he can earn any real money; she's practical as well, and allegic to marriage, so they do nothing about their feelings, which leaves them both miserable. In the course of trying to forget him, she takes her employer up on his seemingly altruistic offer of an apartment in the building he owns -- but Brown gets the wrong idea about Ruth, Hartman, and the apartment, and abandons any thought of marrying her. Meanwhile, Betty has fallen in love with Clarence Howe (Andy Devine), a talkative and eccentric male nurse who rides in the same ambulance that Myron is assigned to -- and Clarence also gets the wrong idea and insists that Betty leave her friend. It also turns out that Hartman's intentions weren't all honorable, after all, and Ruth is left without a job or a decent home to live in. Matters go from bad to worse when she's hit with a sudden attack of acute appendicitis, which brings Myron back into her life, just as her life is on the line.

There are no critic reviews yet for Impatient Maiden. Keep checking Rotten Tomatoes for updates!

There are no featured reviews for Impatient Maiden at this time.