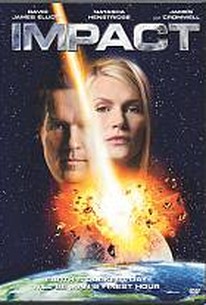 After a meteor shower streaks through the Milky Way, a brown dwarf with heavy gravitational pull crashes on the moon, causing the lunar body to change its orbit and head straight toward Earth on a deadly collision course. With less than 40 days to restore the moon's orbit, scientists Alex Kittner (David James Elliott), Maddie Rhodes (Natasha Henstridge), and Roland Emerson (Benjamin Sadler) are in a desperate race against time to launch a lunar mission that will save both planets from mutual destruction. James Cromwell and Steven Culp co-star.

There are no critic reviews yet for Impact (MINI-SERIES). Keep checking Rotten Tomatoes for updates!

There are no featured audience reviews yet. Click the link below to see what others say about Impact (MINI-SERIES)!