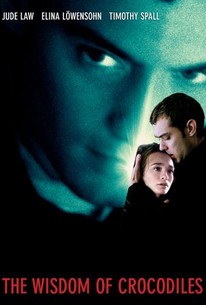 This obscure British production by veteran Hong Kong director Po Chih Leong stars Jude Law and was released just before Law garnered acclaim for his role in The Talented Mr. Ripley. Law plays Stephen Griscz, a multi-talented mystery man with an intoxicating appeal to women. Though he is dashing and urbane, every woman he woos ends up dead. Griscz's trail of dead female bodies is being investigated by police inspector Healey (Timothy Spall). Anne Levela (Elina Lowensohn) is a strong-willed engineer who seems to be a match for Griscz. But Griscz is actually a vampire who can only be returned to human form when he finds the perfect woman. Anne appears to be that woman.

A philosophical thriller that's no less intriguing for being murkily theological and ceaselessly artsy.

Raises the most profound issues about the difference between humans and animals, good and evil, truth and lies.

...so enigmatic and mysterious that by the time the movie's over, you still aren't entirely sure what just happened.

Not much actually happens.

This pompous and dispassionate piece of vampire business leaves you longing for the ominous mists of Transylvania and midnight.

Any subtlety is lost in the broader superficiality of a work which fails to engage on an emotional level.

Director Po Chih Leong and cinematographer Oliver Curtis certainly know how to provide visual splendor for this film without much of a pulse.

Wisdom of Crocodiles is a thought-provoking, memorable film that develops into a psychological shell game that leaves the viewer as breathless as the heroine.

Not bad. I was able to put my immense dislike of Jude Law on hold long enough to watch this, (mainly as I was interested to see Elina Lowensohn in something other than Nadja or the Hal Hartley movies). This movie seems a little on the long side, even though it actually isn't, and an interesting spin on vampires is stretched a little thin, but on the whole, I didn't mind it. Elina, as always, adds a quirky presence to this. She is definitely an underrated actress. Jude Law is pretty good too, and I don't generally say that, have not really liked him in anything since Gattaca. Fans of the genre might enjoy this, although it is not especially violent and isn't a great deal of sex in it, which is unusual for a movie of this type. It is more of an arthouse take.

Very bizarre and very cheap looking. It's a straight-to-video in every way, but it's really interesting for some reason. It's essentially Jude law running around seducing girls and being a vampire. I just honestly have no idea what was going on here with the plot, it seemed like they were trying to update Dracula but I can't be sure.

This was actually a bit of a surprise. I was expecting absolute crap, and got an actually half decent film. The acting was good, especially Jude, and the story was at least different from most films.

Jude Law as a vampire. Dammit, they know my weakness! This is a really seductive film, and the premise is fascinating. Although it takes a bit of a wrong turn near the end, it redeems itself at the last moment. It's hard to say what it is about this movie that's so compelling. It just is.