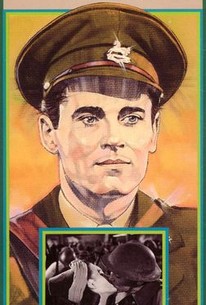 Though Henry Fonda is top-billed in The Immortal Sergeant, the title character is played by Thomas Mitchell. Set in the Libyan Desert during WW2, the story finds tough but compassionate British Eighth Army sergeant Kelly (Thomas Mitchell) in charge of a 14-man patrol. Kelly's corporal is Colin Spence (Henry Fonda), a shy and retiring Canadian. When the squad becomes lost in the desert, it is the guidance and example of Kelly that brings the timid Spence out of his shell. Kelly ultimately dies, leaving Spence in charge of the surviving soldiers. Applying the lessons learned from the Immortal Sergeant, Spence is able to lead his comrades back to allied lines, becoming a hero in the process. Second-billed Maureen O'Hara plays Spence's sweetheart in a series of gratuitous but effective flashbacks. Immortal Sergeant was based on the novel by John Brophy.

Gordon B. Clark
as Soldier
View All

There are no critic reviews yet for Immortal Sergeant. Keep checking Rotten Tomatoes for updates!

Henry Fonda plays a quiet, unassertive bloke who is gliding through life sort of, when WWll strikes in England. He joins the fight because ... and in the process of war leaves "quiet, unassertive" behind. On the front he remembers fondly the girl he left behind, seen in flashbacks (Maureen O'Hara, as sexy a woman as ever lived) but his reality is the present: enemies trying to kill him, slackers backbiting next to him, and his only friend a tough veteran who gives him the downlow on what's what in life (embodied by Thomas Mitchell in the title role in one of his best roles ever). The timelessness of this tale cannot be overstated, and the director, John M. Stahl, makes the most of the limited budget he had. Worthy.