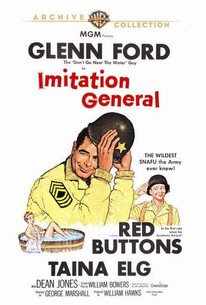 Based on a novel by William Chamberlain, Imitation General has a bit more story depth and character development than the average WWII service comedy. Glenn Ford stars as M/Sgt. Murphy Savage, who is forced to take drastic action when Brigadier General Charles Lane (Kent Smith) is killed in action. To assure the success of the General's mission, and to sustain morale within the ranks, Sgt. Savage poses as the deceased Lane. Standing on the sidelines to kvetch and moan is Red Buttons as Cpl. Chan Derby, who's certain that both he and Savage will be shot at sunrise for the sergeant's deception. Finnish actress Taina Elg is somewhat incongruously cast as a French farm girl. Given the fact that the story of Imitation General is motivated by the "passing of a torch", it's ironic that the film's first network showing in November of 1963 was postponed by the JFK assassination.

There are no critic reviews yet for Imitation General. Keep checking Rotten Tomatoes for updates!

There are no featured reviews for Imitation General at this time.