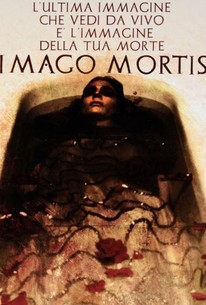 Inspired by the visually stylish Italian giallos of the 1970s, first-time writer/director Stefano Bessoni's Imago Mortis follows a young film student on his quest to unmask a killer who projects his victims' last visions for the entire world to see. Bruno (Alberto Amarilla) is a student at the F.W. Murnau Institute, an international film school where aspiring filmmakers ply their trade. After discovering a bizarre helmet that immediately goes missing, Bruno is troubled to see his classmates start dropping like flies. There's a killer on the loose, a madman who taunts his prey by using a camera obscura to project the final image seen by his previous victims before moving in for the kill. His gruesome technique is based on the theory of "Thanatography," in which the final image a person sees before death is permanently imprinted on their retina. By removing his victims' eyes after the murder has been committed, the killer not only collects the ultimate trophy, but has a morbid means of taunting future victims, as well. But Bruno suffers from terrible nightmares, and his waking reality becomes ever more twisted; identifying the killer becomes an impossible task. After all, it could be anyone from former director of photography Astolfi (Francesco Carnelutti), whose son was killed while working on a film directed by Professor Olinski (Alex Angulo), to Prof. Olinski himself, or even school proprietor Countess Orsini (Geraldine Chaplin), whom Bruno suspects to be the leader of a collegiate cabal that may wield more power than either he, or the rest of the student body, actually realizes.

There are no critic reviews yet for Imago Mortis. Keep checking Rotten Tomatoes for updates!

There are no featured reviews for Imago Mortis at this time.