Imaginary Witness: Hollywood and the Holocaust (2004) 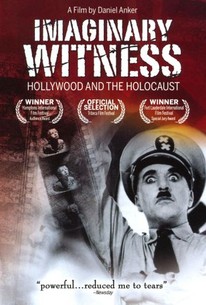 This is the riveting story of the American film industry's complex and fascinating response to the horrors of Nazi Germany. Utilizing carefully selected excerpts from extraordinary and in some cases rarely-seen films, and told through the first-hand accounts of the directors, actors, writers, and producers, the film covers some of Hollywood's most important movies, including "The Mortal Storm," "The Great Dictator," "The Search," "The Diary of Anne Frank," "The Pawnbroker," "Judgment at Nuremberg," "Sophie's Choice," and "Schindler's List." The film takes us from the American ambivalence and denial during the heyday of Nazism, through the silence of the post-war years, and into the present day. It asks hard questions: about the uneasy relationship between American popular culture and the Holocaust, about the responsibility of filmmakers in their portrayal of history, and about the power of film itself to affect the way we look at ourselves.

Critic Reviews for Imaginary Witness: Hollywood and the Holocaust

Imaginary Witness is powerful and complex, and few will manage to make it through to the end without gasping, weeping or covering their eyes.

Anker's film is an important one, shining a light on that red stain and how we saw it filtered through Hollywood's lens.

Daniel Anker's film faults Hollywood both for ignoring the Holocaust during the war years and for trivializing it later. It's a mixed message that coheres largely thanks to Anker's archival spadework and his luck in securing interviews.

Imaginary Witness works fine as an illustrated history, but the material could've supported something more probing and provocative.

This solid, clip-heavy history of Hollywood's narrative efforts pushes past sobriety to arrive at some tough ideas.

Deserves merit for detailing a painful subject with maturity and intelligence

Noteworthy for clips from less familiar films and newsreels, and interviews with creative participants in groundbreaking films.

Originally made for AMC, its solid collection of clips does illustrate one salient point: Depicting evil poorly is a sin unto itself.

Some of the speakers are a bit too self-congratulatory, but the film is still hugely informative.

Sheds light on the paradoxes and political maneuvering that went on in the studios.

Falls into the some of the same traps as the films it politely criticizes.

Audience Reviews for Imaginary Witness: Hollywood and the Holocaust

This is an excellent documentary, which depicts the Holocaust through Hollywood movies and television. Especially interesting is Hollywood's anemic reaction to Hitler's rise to power during the 30s, which shows how afraid Hollywood moguls were to offend Nazi Germany before America's entry into the war. The film clips of the Holocaust shown through movies is brilliantly depicted, and the commentary from historians and movie makers explains the evolution of how Hollywood movies became more honest and open in showing this horrible chapter in human history. Very interesting film.

An in-depth look at how Hollywood has portrayed the Holocaust, from Confessions of a Nazi Spy and Black Legion to Schindler's List and The Pianist. Insightful and revealing.

[font=Century Gothic]Narrated by Gene Hackman in an accusatory tone, "Imaginary Witness" is a frustrating documentary whose intention is to explore the history of the Holocaust in Hollywood films. What it inadvertantly does is explore the evolving level of content in these same movies.[/font] [font=Century Gothic]The documentary starts off in the 1930's, ascribing a lack of anti-Nazi films to the potent anti-Semitism of the time. Actually, government policy never directly addressed the Holocaust and so, neither did the propaganda. It also had to do with the perennial fact of Hollywood that its producers and directors would make films they think other people want to see, not what they themselves want to see. This might explain why the only major cinematic attack on the Nazis of this period came from Charles Chaplin with "The Great Dictator."[/font] [font=Century Gothic]After World War II, the Italians were quickly deep into neo-realism while Hollywood was still in fantasy mode.(Another of the documentary's faults is that it does not survey European films to compare and contrast.) It is unfair to attack the 1959 version of "The Diary of Anne Frank" for not going into a concentration camp because it is unnecessary.(And it also unfair to attack blacklistees who were probably the most fervent of anti-Nazis. Look at Chaplin for example.) By 1965, reality was creeping back with "The Pawnbroker" which might also have been one of the first Hollywood films to contain nudity. The final shot in the film is of the real street corner of Park Avenue and 116th Street in New York City.[/font] [font=Century Gothic]Television would take the lead with the miniseries "Holocaust" and "War and Remembrance" but the documentary does not even mention "Playing for Time." Not until "Schindler's List," would the Holocaust be an economically viable topic for a major Hollywood film.[/font] [font=Century Gothic]But none of the movies mentioned can hold a candle to actual newsreel footage of the liberated concentration camps. Despite this, as the documentary puts it, there is a power to the images in any film which can be used to impart history. For example, in the remake of "To Be or Not To Be," I learned for the first time that gays were also persecuted by the Nazis. For more information, check out the documentary "Paragraph 175." So, it should be interesting to see how Hollywood depicts other genocides.[/font]