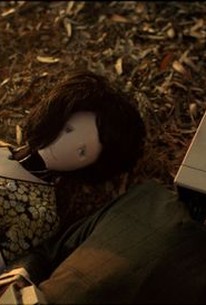 A boy-meets-girl love story, set in LA and experienced by robots, I'M HERE premiered at the 2010 Sundance Film Festival to great critical acclaim. Filled with gorgeous photography, behind-the-scenes ephemera, and funny, insightful interviews, There Are Many of Us (McSweeney's) celebrates the uniquely spontaneous making of the film I'm Here, The book includes an original CD soundtrack as well as a DVD of the movie, with special bonus content.-- (C) IFC

Spike Jonze's little allegory, loosely based on The Giving Tree, has the director's prized dialogue and beautiful cinematography in full effect, even if its short length really harms would could have been a more substantial film as a whole.

A very cute and familiar rendition of The Giving Tree. I am so enamored with Spike Jonze's style of setting these beautifully sad moods that are just so fun and inspiring. It feels like existing with not enough sleep, or waking up early in the blue morning, when it's cold and the day is still early, still innocent. Much like the feeling of falling in love, the beginnings and the early sensations. Sometimes you just wish all of life could be as simple with that tinge of complex excitement, that it would go on forever.

Spike Jonze is a talented director cut from the same technicolor dreamcloth as Michel Gondry, directing music videos before making the leap to feature films such as Adaptation, Being John Malkovich, and Where The Wild Things Are (incidentally, the young star of Where The Wild Things Are recently starred in another robot short called Blinky). Jonze's films and videos definitely have a specific feel that is bizarre but heartfelt, and as in Where The Wild Things Are, I'm Here makes excellent use of costumes married seamlessly with CGI. There's no question that I'm Here is very well made from a technical standpoint, but like Blinky I feel that the whole robot premise is hampered by foggy planning. When people are in a terrible accident or fall deathly ill, their loved ones often wish they could take their place. That is sort of the main idea behind the short, and it works well within the context of modular robot body parts that can be swapped from one robot to another. The robots are presented as 2nd class citizens, prohibited from driving vehicles and possessing limited personal wealth. It is, therefore, something of a sacrifice for the main character to give up his body parts to repair his lover. There's no indication that she'll be able to buy replacement parts for him any time soon, but the film leaves us with the impression that she'll do whatever is necessary to fix him up. It's cute, and even a little touching. But it doesn't make much sense if you think a little harder about the premise. For example, why should the robots be assigned typical human gender roles? Even in animated films starring living creatures doing so seems natural, but it breaks down when dealing with artificial life. Here, there need be no genders at all - and besides, an artificial intelligence may reproduce itself asexually anyway through file copying or self replication. Perhaps the robots actually possess human brains or digital copies of once-human minds, but this isn't really explained, nor is the source of the female robot's creativity. Is she displaying an unusual level of artistic inspiration for a robot, or is she simply a more sophisticated A.I. than her male counterpart? We know he works a simple job at a library (probably better handled by an on-site cart robot), but her job is never seen - perhaps she was designed to create artwork, in which case her creativity may not be that unique at all. If they are artificially intelligent and not cyborgs with human brains, shouldn't the information that makes up their memories and knowledge be backed up in the cloud, or in a safe database? If so, losing your body in an accident would carry significantly diminished consequences, since your consciousness would have a life of its own outside the material body. You might even be able to download your mind into another body, share the same body as another robot simultaneously (or in turns), and so on. So in conclusion, I guess you could say I enjoyed the film and it got me thinking, which tends to be my undoing. This is a repost from my website: www.plasticpals.com

The characters and the storyline are definitely full of cliches, however, there´s something really nice and fresh in this sweet "little" film. Forget everything you ever saw, read or heard about love. Or, better saying, remember all you ever saw, read or heard about love and you´ll find it there. *Watch it here: http://www.imheremovie.com It´s an amazing experience to watch it directly from the site. **There´s also something to think about between the robots that need to recharge and us that live over-connected, all the time. (something to write later, in a proper review)