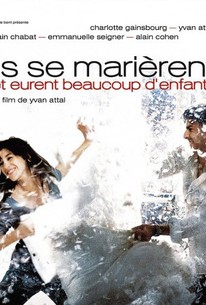 Critics Consensus: Though this French film features good acting, it lacks the wit and charm one would expect to see.

Critics Consensus: Though this French film features good acting, it lacks the wit and charm one would expect to see.

Critic Consensus: Though this French film features good acting, it lacks the wit and charm one would expect to see.

Happily Ever After Photos

Writer, director, and actor Yvan Attal takes another look at the ups and downs of love and monogamy in this biting romantic comedy. Vincent (Yvan Attal), Fred (Alain Cohen), and Georges (Alain Chabat) are three Parisian men in their early forties who are coming to the unfortunate realization that their love lives are not what they dreamed of in their youth. Vincent is married to Gabrielle (Charlotte Gainsbourg), and while there's still some spark left in their marriage, it usually appears only after an argument. Vincent is having a furtive affair with a beautiful woman (Angie David), while Gabrielle is tempted to do the same when a handsome man in a record shop (Johnny Depp) begins silently flirting with her. Fred is the bachelor of the group, and seems to have an endless parade of women passing through his bedroom, but no one misses the fact that he longs for the sort of long-term relationship that has so far evaded him. And Georges is reaching the end of his rope with his wife, Nathalie (Emmanuelle Seigner), an abrasive feminist who insists on making every aspect of their lives a political matter, but lacking the courage to break up with her, Georges deals with his feelings in the traditional manner -- he buys a new car. Happily Ever After was Attal's first project as writer and director after his international hit Ma Femme Est une Actrice.~ Mark Deming, All Movie Guide

Stéphanie Murat
as Géraldine
View All

Critic Reviews for Happily Ever After

This is an affair to forget.

Gets bogged down in midlife-crisis cliches.

Attal knows that no matter how adult we feel when we say, 'I do,' marriage is all child's play: jealousy, lies and pure, unconditional love. Perplexing, but not a bad option.

Happily Ever After is never as insightful or as funny as Woody at his best. But the film has a fine-tuned approach to human behavior.

A meditation on the joys and frustrations of monogamy that manages to be a diverting and funny character study at least most of the time.

Attal taps into that unexpectedness -- the inability of just one person to captain the course of a relationship no matter how hard they try -- and he plays it for all it's worth.

There are a few quality moments, but this fairy tale is far from enchanting.

Whatever points screenwriter/director Attal is trying to make about relationship envy get lost as the marital conflicts become more contrived and shrill.

In a world filled with empty lust and marital discord, Yvan Attal's wistful comedy is about a guy who loves his wife.

Audience Reviews for Happily Ever After

An interesting study of three men who are friends, in different marital situations, and who have different approaches to love and happiness. It explores fidelity and what constitutes happiness within the family unit. Charlotte Gainsbourg is lovely in this as Gabrielle, wife of Vincent (Yvan Attal). Some bizarre games transpire between these two and the cover art is taken from one of those playtimes. Lots of interesting camera work, a lively script, and some lovely actors keep things from becoming too trite, but it's not all that deep either. Mildly entertaining at best.

this is a really realistic story and fine acting especially by the core cast. The only problem i had with it is the ending seems to be inserted smack dab in the middle of the story, which left me a bit confused. Its a bittersweet tale about marriage; an old subject to be sure, but refreshing with this french perspective. Enjoy!

i really enjoyed this film's cross-section of people dealing with various facets of coupledom, love, fidelity, marriage, etc. the elevator ride with johnny depp was quite poetic and a wonderful close to the film.

Happily Ever After Quotes