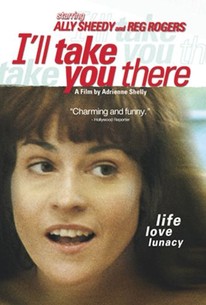 Former Hal Hartley collaborator Adrienne Shelly directs her second feature about a blind date gone horribly horribly awry. Still thoroughly depressed after his girlfriend dumped him three months ago, Bill (Reg Rogers) is coerced by his sister (Shelly) into going on a blind date with Bernice (Ally Sheedy). Bill is immediately underwhelmed by his cheerless date, and as the night grinds on, he bluntly tells her what he thinks. Instead of ending things, Bernice becomes obsessed with the man, telling him at one point that since the date, he has "taken something away." After trying more standard means to worm her way into his life, she takes drastic action; she pulls a gun on Bill and ushers him to her vintage Mercury. Soon Bill finds himself the unwilling accomplice to Bernice's serial gunpoint robberies of boutiques. Meanwhile, she lambastes him for not being adequately respectful. Before long, Bill finds himself in upstate New York and out of his rut. I'll Take You There was screened at the 1999 Telluride Film Festival.

Critic Reviews for I'll Take You There

I merely went along for the bumpy ride.

Audience Reviews for I'll Take You There

There are no featured audience reviews yet. Click the link below to see what others say about I'll Take You There!

I'll Take You There Quotes