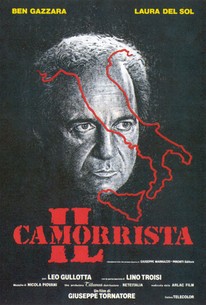 Gradually picking up dramatic steam as it moves through its 2 1/2 hour running time, this gangster film is loosely based on the career of one of Naples' most sadistic crime bosses, Raffaele Cutolo. Here, the mobster (played by Ben Gazzara) is simply called "The Professor" and is first introduced in prison where he landed after murdering a stranger who was flirting with his sister. From prison he begins to move up the Camorra ladder when he recruits inmates to join him in bringing down the leading crime boss and has his sister pay off their families in return. Without ever leaving prison "The Professor" succeeds in replacing the ruling "don" but far from resting on his laurels he starts to wipe out his enemies and anyone whose loyalty might be in question. Still hampered by his incarceration, he finally escapes and joins forces with the Cosa Nostra and even begins to put major politicians in his pocket. It seems like nothing can stop him until a lone and much-benighted police chief (Leo Gullotta) enters the picture. ~ Eleanor Mannikka, Rovi

Ben Gazzara
as The Professor

It manages to entertain even though it feels like we've seen this before. [Full Review in Spanish]

Giuseppe Tornatore's debut, A typical Godfather-ish flick with nothing really special about it