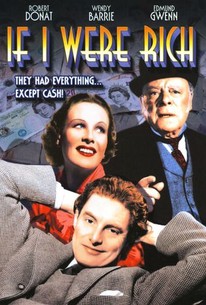 Businessman Edmund Gilbert Edmund Gwenn and his daughter Lilian Wendy Barrie are a well-to-do father and daughter caught in the down-draft of the British economic depression -- he's a financier without finance, and they're both struggling to put on a big front as their resources disappear. When Paul Martin (Robert Donat), a once-wealthy young man trying to survive as an employee of the gas-works, shows up to turn off their utilities, it seems like the end -- but Paul takes a fancy to Lilian and decides to leave their gas and power on. And Mr. Gilbert suddenly takes a fancy to Paul when the younger man discovers that an escaping thief who bumped into him on the underground has left $100,000 on Paul's person. Now Edmund wants the young man as his partner in a new venture, to attract other investors, and matters become more comically complicated still as the byzantine world of romance and finance intertwine.

Anthony Holles
as Inspector
View All

Critic Reviews for If I Were Rich

There are no critic reviews yet for If I Were Rich. Keep checking Rotten Tomatoes for updates!

Audience Reviews for If I Were Rich

Throwaway farce enlivened by the stars.

If I Were Rich Quotes