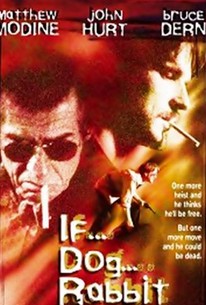 An ex-con finds that going straight isn't easy -- especially when it means going against your family. Johnny Cooper (Matthew Modine) is a petty criminal who has just gotten out of jail after doing time for armed robbery. While Johnny's brother James (Kevin J. O'Connor) and father Sean (John Hurt) are both involved in lives of crime, Johnny is determined to stay on the straight and narrow, despite his dad's objections, and has taken a job fixing cars for McGurdy (Bruce Dern). One day James stumbles back into Johnny's life, and while Johnny wants to welcome his little brother, James throws his brother's life into jeopardy when he attacks Gilmore (David Keith), Johnny's parole officer and a friend since high school. On the run from the police again, Johnny and James head for Mexico, where James tries to talk Johnny into joining him for one big score -- robbing the day's receipts from a bullfight arena. If... Dog... Rabbit was the first feature film written and directed by actor Matthew Modine; the supporting cast also features Lisa Blount, Lisa Marie, and Julie Newmar. It was released on home video as One Last Score.

Critic Reviews for If... Dog... Rabbit

Matthew Modine is another director contributing to the growing trend of Tarantino-inspired pieces of junk that find little to no redemption on their own merits.

Almost garnering a recommendation just for the sight of Lisa Marie getting zapped by a car battery and shot to death.

There are no featured reviews for If... Dog... Rabbit at this time.