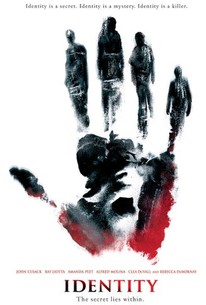 Critics Consensus: Identity is a film that will divide audiences -- the twists of its plot will either impress or exasperate you.

Critics Consensus: Identity is a film that will divide audiences -- the twists of its plot will either impress or exasperate you.

Critic Consensus: Identity is a film that will divide audiences -- the twists of its plot will either impress or exasperate you.

Ten strangers are brought together during a weather emergency, only to discover a far greater danger awaits them in this suspense-drama. A sudden rainstorm in a remote desert town strands a disparate variety of people at a rundown motel. A convict sentenced to death, Malcolm Rivers (Pruitt Taylor Vince), is stuck in transit with his lawyer (Alfred Molina). Ginny and Lou (Clea DuVall and William Lee Scott) are a not-especially-happy pair of young marrieds on their honeymoon. Ed (John Cusack) is a bright and resourceful chauffeur working for actress Caroline Suzanne (Rebecca De Mornay). George York (John C. McGinley) is a concerned husband trying to find help for his wife (Leila Kenzle, who was struck by Caroline's limo. Paris (Amanda Peet) is a prostitute who wants to move on to a better life. And Rhodes (Ray Liotta) is a police detective who has in his custody Robert Maine (Jake Busey), a dangerous and deranged criminal. As the rain pours down and motel manager Larry (John Hawkes) tries to care for his customers, one by one the unexpected guests begin losing their lives at the hands of a murderer. As the body count mounts, the stranded travelers struggle to find out who the killer is; however, they also learn each of them has a secret, and that their arrival at the motel has not been a matter of mere chance.

A lame-brained nut job in search of an identity of its own.

A nihilist project in Usual Suspects mode: Nothing is as it seems, because nothing matters in the least.

[A] very well made horror thriller.

Assorted examples of artificially flavoured humanity ... proceed to panic, bicker and run with the customary perversity that characters in situations like this do toward their gory destinies.

Deserves credit for at least trying something fresh in the psychological-thriller realm, and for the mood of goofball creepiness it creates.

More than an entertaining thriller. It's a highly original one.

My eyeballs were doing some serious rolling of their own at the general ineptitude of this failed mating of Friday the 13th and Ten Little Indians.

the central twist which unifies all the film's elements is so ingenious and unusual that recognising the killer ends up being just one small part of this film's multi-faceted identity.

A good cast is enacting this fancy rubbish; what drew them to the material besides its self-conscious cleverness is beyond me.

The cast is game, the twists are clever, the writing is tight.

An intriguing, tense and solidly structured thriller centered on a mystery that is pretty well developed - even if it cannot escape the clichés of the genre -, but what makes it stand out is how it turns out to be much more intelligent than it seems despite its flaws and absurdities.

An entertaining, if heavily problematic, exercise in the same universe as "The Usual Suspects" concerning a group of strangers, who seemingly have no connection with one another, stranded at a motel during a dark, rainy night, before one by one they begin to get mysteriously killed. On first watch of this film a few years back, I thought it was a little lame. However, after revisiting it, I have to say it's a tad better than what I had remembered. Notably, the acting raises this movie above "bad" status, thanks mainly to the always dependable John Cusack sweeping in for the rescue. The twists and turns (including one big mega super duper ultra twist) are well executed, although there are certainly more than one plot hole that one can discover rather easily. Still, for being a short little thriller, it conjures up enough atmosphere and curiosity in these characters to make you wonder what is going to happen next. Far from perfect, but also not terrible.

This is how thriller should be, Good suspense, good story, nice twists!