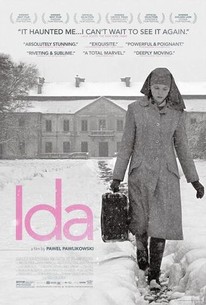 From acclaimed director Pawel Pawlikowski (Last Resort, My Summer of Love) comes IDA, a moving and intimate drama about a young novitiate nun in 1960s Poland who, on the verge of taking her vows, discovers a dark family secret dating from the terrible years of the Nazi occupation. 18-year old Anna (stunning newcomer Agata Trzebuchowska), a sheltered orphan raised in a convent, is preparing to become a nun when the Mother Superior insists she first visit her sole living relative. Naïve, innocent Anna soon finds herself in the presence of her aunt Wanda (Agata Kulesza), a worldly and cynical Communist Party insider, who shocks her with the declaration that her real name is Ida and her Jewish parents were murdered during the Nazi occupation. This revelation triggers a heart-wrenching journey into the countryside, to the family house and into the secrets of the repressed past, evoking the haunting legacy of the Holocaust and the realities of postwar Communism. In this beautifully directed film, Pawlikowski returns to his native Poland for the first time in his career to confront some of the more contentious issues in the history of his birthplace. Powerfully written and eloquently shot, IDA is a masterly evocation of a time, a dilemma, and a defining historical moment; IDA is also personal, intimate, and human. The weight of history is everywhere, but the scale falls within the scope of a young woman learning about the secrets of her own past. This intersection of the personal with momentous historic events makes for what is surely one of the most powerful and affecting films of the year.

Artur Mostowy
as Drummer
View All

Now that Paweł Pawlikowski's haunting Polish film has been nominated for a foreign-language Oscar, Ida is back in the conversation. Let yourself be enveloped by a modern cinema classic.

Nestled within its sins-of-the-elders narrative is a faintly charming cross-generational bonding picture, pairing a worldly cynic with a young girl taking her last gasp of secular air before giving her life to the Lord.

With her brassy, determined aunt, Ida sets off to find answers and discovers life beyond the convent walls in this leisurely but satisfying journey.

Don't adjust your set: the film is (strikingly) photographed in Bergman-esque shades of gray-and-white.

Pawlikowski is intelligent, sensitive to mood and willing to defy fashion -- and this last quality, in particular, is rare enough to be worth valuing.

This frugal, static film in black and white is wondrous with life and drama. First-time actress Agata Trzebuchowska has a face you could watch forever.

If life is made up of small moments, Ida is a full-length mirror.

Shot in black-and-white, every frame is exquisitely composed, and at its heart is Ida's pale canvas of a face, with an enigmatic gaze that casts a lingering spell.

Ida is permeated with such thick, dank sorrow that I began counting the number of times any character smiled. I had to open it up to "not explicitly frowning" before someone cracked the scoreboard.

Even if Ida is more admirable than it's involving, there's still plenty to admire.

A film that ultimately has a lot in common with its lead character: sobriety, restraint and, most importantly, mesmerising eloquence.

In spite of the talent of both actresses, and the deep issues the film brings up, these two characters, in the end, inhabit unconvincing gendered stereotypes.

With a 1.37:1 aspect ratio and a gorgeous, oppressive cinematography in black and white, this gripping drama does a flawless job exploring the silence and empty spaces within the frames to underline the elusive void that is present in the lives of two women.

This film isn't much interested in telling what is happening in the present, because the implications of the past are too great. A soon to be confirmed nun is sent away from her parish to meet her only living relative before she takes her vows. When they meet she learns a sad truth about her family, and realizes that her past is important, though she can't remember it. The film blends together the horror of the Jewish genocide that was the Holocaust, and the ever encroaching form of Communism that had a hold of Poland. The film balances these politics, while also showing the emotional struggle of the main character, who seems to see the beauty of forgiveness, but she herself cannot totally give into it. She doesn't have the authority to forgive, because she was an infant, but she can understand the ills of those who took her family from her. It's a mysteriously dark tale that has the ability to look and feel beautiful with its stunning cinematography and choice of shooting in black and white. This film is very powerful in its depiction of these characters, in this time, trying to find answers where none really exist.

The Christian and Jewish belief systems are two very different ideals, and watching a woman raised as a nun, realizing she has a Jewish aunt was fascinating to me. The back and forth they share once Ida realizes she is a Jewish nun was very well-executed. At a mere 80 minutes, this film flies by quickly and you are sucked right in. I felt myself wanting more by the end, even though they wrapped it up perfectly. The film did not have to take the few dark turns that it did, but aside from those, this is a near perfect film. Simple and to the point is the best way to make a film sometimes. Well-written, well-directed, and extremely well-acted by it's two leading ladies. With frames as uniquely and precisely shot as this film is, every shot counts in this picture, and I must say, "Ida" is a superb film.