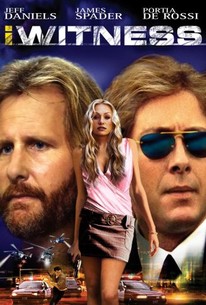 An American abroad discovers that a series of crimes may have a greater significance than imagined in this drama. Rhodes (Jeff Daniels) is an American human rights activist who has come to a small Mexican border town to help oversee union elections at a factory owned by a United States firm. While in Mexico, Rhodes learns that things have not been quiet around town lately -- a number of people were found shot dead in a tunnel just across the border in the States, and a pair of Californians who came to Mexico to do some trail riding have disappeared without a trace. Rhodes has a hunch the recent crimes may have something to do with the hotly contested upcoming election, and with the permission of a pal from the State Department (James Spader), he joins up with Castillo (Clifton Collins Jr.), a police detective who is looking into the tunnel deaths. I Witness also co-stars Portia de Rossi.

Miguel Mas
as Thug No. 2
View All

Critic Reviews for I Witness

...James Spader is undoubtedly at his scene-stealing best here as a smarmy government agent.

Verging on 'so bad it's fun to watch' territory, I Witness doesn't quite make it there either.

Audience Reviews for I Witness

Despite the best efforts of Jeff Daniels and the criminally underutilized James Spader, I Witness falls flat. The script is a bit of a mess, the action sequences bland and uninspired, giving the film an overall TV movie feel. While Portia de Rossi, partner to Ellen Degeneres, is sexy, she was a liability for this film.