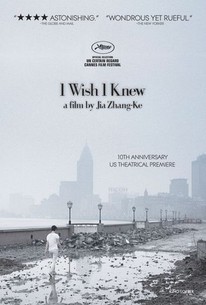 Filmmaker Jia Zhangke offers a personal look into the history of Shanghai, one of China's most exciting and diverse cities, in this documentary. While Shanghai is a city of no small historical importance in China, in Haishang Chuanqi (aka I Wish I Knew) the focus is less on the facts of the city's legacy than the stories of the people who have lived there and how their lives have been shaped by its history. Those interviewed by director Zhangke include people whose parents fell victim to the violence during the rise of communism, others who fled the country during the revolution, and those who were witnesses to the Sino-Japanese War and the Cultural Revolution. Zhangke also examines how Shanghai's history has been depicted in the Chinese cinema, illustrated by clips from a number of Chinese historical epics, as well as the stories behind some of China's great films of the past. I Wish I Knew was originally produced as part of the Shanghai World Expo; when the project went over schedule, it instead received its world premiere at the 2010 Cannes Film Festival.

The Gentlemen is Vintage Guy Ritchie

The resulting mix of image and interview, weariness and wonder, makes for a sober assessment of just how much change China's largest city has been through since the 1930s...

I Wish I Knew functions as an admirable cinematic tone poem about a place and its times.

Jia is building not just a portrait of a city, but of a fragmented people - one story and memory at a time.

The pacing is steady. The stories are told simply, with zero affectation or buildup by the director. The effect is astonishing.

Making its theatrical debut stateside a decade after bowing at the Cannes Film Festival, Jia Zhangke's documentary is a masterpiece worthy of (re)discovery.

One of the more poetic documentaries I have ever seen, I Wish I Knew is an ode to the impact one city has had, across so many decades, on so many lives.

Ending a minor but fascinating film in Jia's provocative oeuvre, the images of these sleepers are a prelude to the other troubled dreams of China (A Touch of Sin, Mountains May Depart, Ash Is the Purest White) that he has made since.

One of Jia's directorial gifts, as he has proven in his documentary, fiction, and hybrid films, is to capture human beings in all their complexity and mystery no matter how brief their appearance before the camera.

Weaving a beautiful, dreamlike path through history, I Wish I Knew is less documentary as essay film than documentary as prose poem, its meandering reinforced by Lim Giong's delicate, melancholy score and Zhao Tao's presence...

I Wish I knew is a rich, multi-faceted city film that challenges viewers to make sense of the various scraps that the filmmaker artfully arranges for our consideration.

There are no featured audience reviews yet. Click the link below to see what others say about I Wish I Knew (Hai shang chuan qi)!