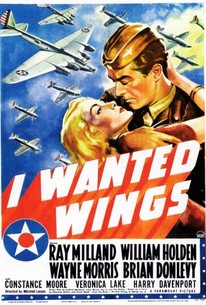 Three disparate young men struggle to become Army Air Corps pilots in this rousing drama that earned an Oscar for its excellent aerial special effects. The film is also noted for making Veronica Lake, who previously appeared in films under the name Constance Keane, a star. For added realism, the three male leads, William Holden, Ray Milland and Wayne Morris were placed into the same training program at Randolph Field, Texas (and also Kelly Field, Texas) as real recruits. Lake plays a seductress who pursues Holden while Constance Moore plays a female photographer who comes to shoot a story and ends up falling for Milland. By the time the pilots' rigorous training has finished only one will have proved himself fit to fly. ~ Sandra Brennan, Rovi

Edward Fielding
as President of the Court

Lee Shumway
as Policeman in car

Critic Reviews for I Wanted Wings

It was necessary to put a couple of ladies between planes and aviators and, although they are fifth legs of a table, without them there would be no movie or drama. And there is. [Full review in Spanish]

There are no featured reviews for I Wanted Wings at this time.