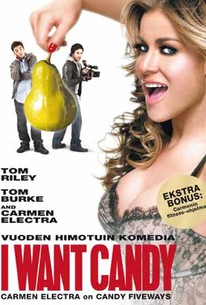 News & Interviews for I Want Candy

View All I Want Candy News

Critic Reviews for I Want Candy

This is no Full Monty, but like the film-within-a-film, it's got enough creativity and enthusiasm to win young audiences over. And, of course, it's also rather rude.

Billed as 'The British American Pie', a label applied apparently without irony.

Enjoyably silly, occasionally hilarious British sex comedy that succeeds thanks to lively comic performances and an exuberant nature that just about compensates for its flaws.

A warm-hearted, smutty comedy that, if predictable, has a likeable cast and plenty of zip.

Audience Reviews for I Want Candy

A pretty good English attempt at a teen comedy. Quite similar to The girl next door, Weird Science in idea. Low budget but with a pretty strong cast, it has it share of funny moments. The award ceremony part was filmed across the road from where I live!

Was hoping for more but this was a watchable, well rounded comedy with some great lines.

A warm-hearted, smutty comedy that has a likeable cast and plenty of zip.