I Still Know What You Did Last Summer1998 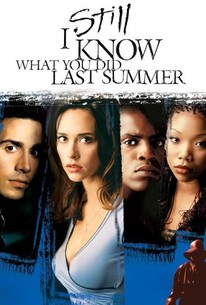 Critics Consensus: Boring, predictable, and bereft of thrills or chills, I Still Know What You Did Last Summer is exactly the kind of rehash that gives horror sequels a bad name.

Critics Consensus: Boring, predictable, and bereft of thrills or chills, I Still Know What You Did Last Summer is exactly the kind of rehash that gives horror sequels a bad name.

Critic Consensus: Boring, predictable, and bereft of thrills or chills, I Still Know What You Did Last Summer is exactly the kind of rehash that gives horror sequels a bad name.

I Still Know What You Did Last Summer Photos

Julie James hasn't been the same since last summer. Still harboring guilt over her role in the death of fisherman Ben Willis, her college grades have slipped and her relationship with high school sweetheart Ray Bronson is on the rocks. After being turned down by Ray, Julie invites a classmate to join her when her best friend Karla Wilson wins an all-expense paid trip for four to the Bahamas. The moment they hit the picturesque island, havoc ensues. Their romantic getaway turns into a vacation of murder and mayhem that soon has Julie and friends running for their lives.

Matthew Settle
as Will Benson

Benjamin Brown
as Darick the Dockhand

Critic Reviews for I Still Know What You Did Last Summer

This followup to last year's successful teens-in-jeopardy opus piles on the chills, thrills and body count.

Neither Trey Callaway, who wrote the script, nor Danny Cannon, who directed the sequel, bring any new ideas to the genre. Cut 'em some slack: That surely was their marching orders.

It's not a bad film for what it is.

When Bad Things Happen to Stupid People might have been a better title.

Completely wraps itself around the film's utter moronic plot elements and red herrings at every turn...

We know what sequel shouldn't have been made.

Needless to say, logic takes a holiday, just not in the Bahamas. [Blu-ray]

I have seen many stupid movies in my life. But [this] would still count among the stupidest, had I seen twice a many movies in half again as many genres.

Like a rotten vaudeville act, this one deserves the hook.

As mindlessly engaging as its predecessor...

Audience Reviews for I Still Know What You Did Last Summer

I remember this being way worse than it actually was (2017 rewatch). A rare case where I actually upped my original rating! It's not perfect, or a scratch on the first movie, and it's got a silly ending, but 90's nostalgia has been kind to this one. I enjoyed the cast (with the exception of Jack Black who is just grotesque as usual) and the slight, silly horror story

I Still Know What You Did Last Summer is a poorly made sequel to a very poor film. Both films are pointless with bad acting, story and poor attempts at scaring the audience. Teen horror films were crap for the exception of Scream. This sequel proves that much. This is a bad film with nothing entertaining about it. The cast is terrible and the story is a plain joke. It's no wonder that most of the cast are forgotten nowadays because they suck at acting. This is yet another bad attempt at cashing on an original film that wasn't good in the first place. This is a film that scrapes the bottom of the barrel and lingers around trying to figure out what it wants to do. This is one of the worst horror films ever made, and I've seen some bad ones and, this film just takes it to a whole new low. A terrible, misconstructed film that has nothing going on, maybe except to bore the hell out of the audience. It's no wonder why these films are in the discount bin of so many retail stores. They're terrible. If you love horror, don't watch this travesty. These films represent the lowest point in horror history along with others such as Urban Legends. This is simply a poorly made horror film that should be avoided by every fan of the genre.

It was alright, but the original was much better.

I Still Know What You Did Last Summer Quotes