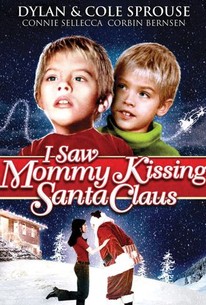 Overhearing his parents Stephanie and David Carver having a heated argument, young Justin Carver (Cole Sprouse) retreats to his bedroom. A few minutes later, Justin peeks downstairs, only to see his mother Stephanie (Connie Sellecca) locked in a warm, romantic embrace with none other than Santa Claus. Unaware that mom's hirsute "lover" is actually his own father, David (Corbin Bernsen), who has dressed up as Santa in hopes of getting back in Stephanie's good graces, Justin is convinced that his parents' marriage is on the rocks -- just like the recently shattered union of his best friend's parents. Further convinced that jolly old Saint Nick is the cause of all the marital disharmony, little Justin goes on a one-boy vendetta, physically assaulting every department-store and sidewalk Santa who crosses his path. Very loosely based on the 1949 hit song of the same name, the made-for-TV I Saw Mommy Kissing Santa Claus first aired December 9, 2001, on the PAX network.

There are no critic reviews yet for I Saw Mommy Kissing Santa Claus. Keep checking Rotten Tomatoes for updates!

Who came up with this? It was very horrible. It was a film mostly for kids yet the kids I know didn't even like it. The acting was very poor, and not just the kids also the adults. The plot was also very horrible. The scene when the dad comes home and falls into his son's traps was a huge rip off of Home Alone. I was expecting the movie to touch more on the topic of divorce and how it affects kids but all we got was a worthless chase in a mall.

Those Sprouse boys are painfully annoying, and it's them that ruin this film. They are irritating, idiotic and poor actors. Watch in disbelief as they try on their "angry faces". It's a confusing and worrying expression. The Sprouse's aren't exactly Culkin's, and the escapades of the young boys soon wear thin. Charming enough to pass as an acceptable Christmas film. Just expect to become infuriated at parts.

This is what happens when i get bored and start watching TV, I start watching movies like I Saw Mommy Kissing Santa Claus. It actually wasn't as bad as it could be nor that unbelievable. I was bored the Saturday before Christmas and it was on....