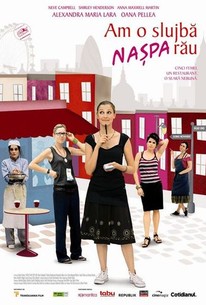 I Really Hate My Job Photos

As the employees at a London restaurant prepare for the arrival of a high-profile Hollywood actor, it quickly becomes apparent that the five women working to make this important meal a success suffer form delusions of grandeur. In the eye of most customers they're three waitresses, a cook, and a dishwasher, but ask these dejected young workers to describe themselves and chances are you'll get an ear-full. Whether discussing weighty issues of love and art, attempting to capture a rat, or contending with a kitchen coup d'état, the workers at this restaurant are always up to something behind the scenes. Later tonight, a famous Hollywood movie star is set to dine at the restaurant, a revelation that sends each one of the imaginative workers into a tailspin of anticipation. Neve Campbell, Shirley Henderson, and Danny Huston star in a film from writer/director Oliver Parker (St. Trinians, An Ideal Husband).

Danny Huston
as Himself

Critic Reviews for I Really Hate My Job

At first glance, there appears much to recommend about his latest work, I really hate my job, though appearances can be deceptive, despite a fine cast, including Brit character actor Shirley Henderson and the long-lost Neve Campbell as two of a team of wo

If you must, see it just for the sepia-toned song and dance sequence performed by Danny Huston in a tuxedo and top hat. Yes, you read that sentence correctly.

Unfortunately a lack of genuine observation continues to dog the film throughout and despite excellent performances, it's all 'pretend'.

Audience Reviews for I Really Hate My Job

Falls seriously flat. I have seen this idea done to much better effect in "In the Weeds". Disgruntled group of waitresses with other dreams spend day at work in restaurant. Could have been so much better. Shirley Henderson is just annoying with that voice, Oana Pellea not very likeable, and Neve Campbell with seriously unflattering short haircut as a failed actress, (perhaps the scene with her getting her boobs out might appeal to some people enough to sit through this mess, but not me). The customers barely exist in this, which might have made for some laughs in this movie, which it seriously needed. Sound was also poor, there was times I could not hear what the actresses were saying. Disappointing mess. Can't believe I stuck it out through the whole thing.

I Really Hate My Job Quotes