I Now Pronounce You Chuck & Larry2007 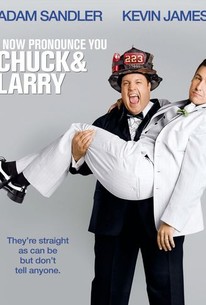 Critics Consensus: Whether by way of inept comedy or tasteless stereotypes, I Now Pronounce You Chuck And Larry falters on both levels.

Critics Consensus: Whether by way of inept comedy or tasteless stereotypes, I Now Pronounce You Chuck And Larry falters on both levels.

Critic Consensus: Whether by way of inept comedy or tasteless stereotypes, I Now Pronounce You Chuck And Larry falters on both levels.

When two testosterone-fueled firemen attempt to register as domestic partners in order to bypass the bureaucratic red tape preventing one of them from naming his own two children as his life-insurance beneficiaries, their low-key ruse turns into headline news in this quirky matrimonial comedy starring Adam Sandler and Kevin James. Chuck Levine (Sandler) and Larry Valentine (James) are two New York City firefighters whose longtime friendship has endured many a five-alarm fire. All that widower Larry wants is to ensure that his two children will be taken care of if anything should happen to him on the job, and all that single blaze-battler Chuck wants is to carry on with his carefree life of noncommitment. Having once rescued Larry from certain death in a particularly fearsome inferno, beholden Chuck feels forever indebted to his brave friend and has vowed to repay the favor when the time is right. When Larry discovers that the only means of circumventing the civic red tape that could throw his children's futures into jeopardy is to take Chuck as his lawfully wedded husband, his obligated pal reluctantly agrees to step up to the alter with the understanding that the arrangement will be a well-kept secret between themselves and the justice of the peace. A potentially fatal flaw in their presumably foolproof plan is soon revealed, however, when an overzealous bureaucrat decides to question Chuck and Larry's partnership. Subsequently forced to embark on a mandatory honeymoon and pose as starry-eyed newlyweds, Chuck and Larry quickly discover just how important it can be to stick by a friend in his or her time of need. Jessica Biel, Steve Buscemi, Ving Rhames, and Dan Aykroyd co-star in a comedy from The Benchwarmers director Dennis Dugan.

Rob Corddry
as Jim the Protestor

News & Interviews for I Now Pronounce You Chuck & Larry

View All I Now Pronounce You Chuck & Larry News

Critic Reviews for I Now Pronounce You Chuck & Larry

It's a set-up as muddled as the sexual politics of this mortifying would-be comedy,

In essence Dennis Duggan's film is patronising and a little degrading.

Adam Sandler adds here to his lengthening charge sheet as the most repellent "entertainer" on the planet.

I Now Pronounce You Chuck and Larry is a comedy of masquerade that Shakespeare might have written if he were pea-brained and talentless and had been commissioned to script an Adam Sandler movie.

My faith in a beneficent God, never strong, has been shattered by news that Alexander Payne contributed to the screenplay for this horrific new Adam Sandler vehicle.

The film-makers behind I Now Pronounce You Chuck and Larry would probably claim a message of tolerance and personal growth, but this woeful Adam Sandler vehicle is as nasty a piece of sniggering homophobia as I have seen in a long time.

No joke from the film will be remembered an hour after viewing it. [Full review in Spanish]

Nobody would have guessed that the refined Alexander Payne would sign on this kind of homophobic comedy full of stereotypes. [Full review in Spanish]

By no means a great film, there is some charm hidden within that crops up enough to make it just the right amount of enjoyable making me feel that I didn't completely waste two hours of my life.

I Now Pronounce You Chuck and Larry is two hours of unfunny, thoughtless stereotypical humor that is too lame to truly become offensive.

Too many writers contributed to the script, resulting in an overly long but not unfunny film.

It's ironic that a film that claims to celebrate tolerance would paint all believers with that unfair brush.

Audience Reviews for I Now Pronounce You Chuck & Larry

Hilarious comedy about two bestfriends who get married to benefit from the work pension fund after one friend was widowed. It's funny from start to finish. Great cameos from lots of well known actors. Highly recommended.

Not as funny as I thought it could be, I love Kevin James ('The King of Queens' rocks) but this just isn't up there. Really wanted to love it but just found myself struggling to smile, as for Adam Sandler..his character is just the same as every other comedy character he plays, getting rather dull now methinks. The story is kinda cool, two men pretending to be gay is always a show stopper haha and there are some good moments like Sandler slapping James' face and James pretending to love it, but nothing special. Just the usual, predictable lines and ending really, stick with 'King of Queens' and some of Sandlers earlier films where his everyman portrayal is at its original best.

Audiences love when a fat fireman marries a skinny fireman due to money problems. Now who thought that was a good idea?