I Never Sang for My Father1970 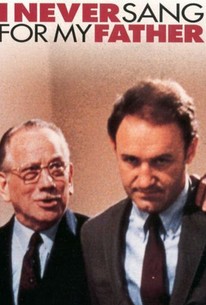 I Never Sang for My Father Photos

Based on the play by Robert Anderson, I Never Sang for My Father is devoted to the prickly relationship between aged Tom Garrison (Melvyn Douglas) and his grown son Gene (Gene Hackman). A college professor who feels that he has never been fully accepted by his self-made dad, Gene announces that he is going to move from New York to marry a California divorcee. His mother (Dorothy Stickney) approves of the union but worries that her son's move will have a negative effect on the increasingly truculent Tom. When his mother dies just before the wedding, Gene is forced to help his father through his dark days. His sister (Estelle Parsons) urges her brother to break the ties for good and all--or else he'll wind up as bitter and withdrawn as their father. Gene realizes the wisdom of these words when he tries to reach out to his father during a vulnerable moment, only to have the crabby Tom tell him to get lost and leave him alone.

Critic Reviews for I Never Sang for My Father

At a time when the cinema is devoted to understanding the young, one can't but welcome a film that cares to bother about the old.

These bare bones of plot hardly give any hint of the power of this film.

I Never Sang For My Father is an emotion filled drama, a realistic and often painful look at the relationship of a middle aged son and his elderly father. But the power of the movie comes less from the drama itself than from the players.

Penned by Robert (Tea and Sympathy) Anderson, this father-son medlodrama is superbly acted by Melvyn Douglas and Gene Hackman, both Oscar-nominated for their turns.

Audience Reviews for I Never Sang for My Father

Very good early Hackman and he and Douglas spar nicely. Another story of intergenerational conflict and misunderstanding appropriately executed by the performers.

I Never Sang for My Father Quotes