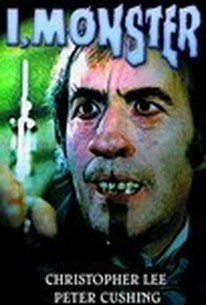 In this fairly interesting variant on Dr. Jekyll and Mr. Hyde from Britain's Amicus Studios, Christopher Lee stars as Marlowe, a stuffy doctor who develops a formula to release inhibitions. When he takes it, Marlowe turns into the evil and repulsive Mr. Blake. The twist is that Blake gets uglier with each successive dose until he becomes a pitiful, ape-like monster. Peter Cushing co-stars as Marlowe's lawyer friend, and a young Chloe Franks appears with Mike Raven and Kenneth J. Warren. Despite the low budget, director Stephen Weeks manages to present a realistic depiction of Victorian England, and Lee turns in a memorable performance. The film started shooting in 3-D, but the idea was discarded during production. ~ Robert Firsching, Rovi

Critic Reviews for I, Monster

There are no critic reviews yet for I, Monster. Keep checking Rotten Tomatoes for updates!

Audience Reviews for I, Monster

There are no featured audience reviews yet. Click the link below to see what others say about I, Monster!